Hiking the AT – The Monsoon Over Hump Mountains 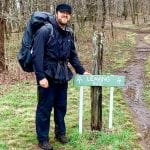 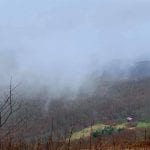 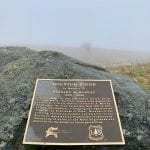 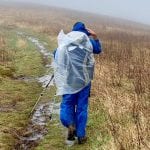 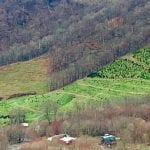 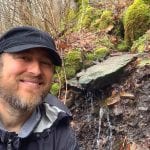 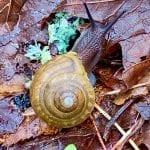 I don’t know if anyone else slept well last night. The high winds rocked the barn to the point I literally thought it was going to collapse. Rain and dirt from the cracks in the barn walls splattered on me all night as the wind howled and whistled around us. I pulled my sleeping bag over my head to cover my face and try to get some sleep. I guess it could have been worse. I could have been in the other smaller shelter with only three walls even more exposed to the weather. Or in a tent outside getting blown all over the place.

Despite my lack of sleep, I got up early in the morning. All of my stuff was damp and dirty. I ate a protein bar and some cold oatmeal. The wind was still howling around and through the barn. The rain continued to dance on the tin roof loudly. Outside the barn bay window you could see fog. It was so thick you couldn’t see anything more than 5 feet away. Needless to say I wasn’t motivated to pack up and hit the trail this morning.

Though the weather forecast was calling for clearer skies later on the day, the idea of sitting around all day waiting for better weather didn’t sound too appealing either. So I packed up and said farewell to Electrolyte and Noodle Harvester. Shawn finished packing and hopped on the trail at the same time I did. So we started hiking together.

We both refilled our water bottles at the stream as we crossed it and headed up the mountain. Almost immediately the sky opened up and poured the rain. The wind felt like it was blowing 50-60 mph and….sideways. The AT is only about a foot wide in a lot of areas. This was one of those areas. We tried to stay on it but as we hiked up the hill the winds were so strong it blew our 6’2”, 200+ lbs bodies off of it every few steps we took. Even though we both had rain gear on, we were completely drenched, including our boots and socks. Oh man, this is going to be a rough day, I thought.

We climbed Little Hump and Big Hump mountains together. I’m sure this area of the trail is beautiful, but we couldn’t see anything with all of the fog. These mountains were bald (no trees), so the wind and the rain was brutal, beating down on us with no protection from any foliage.

We pushed hard and hiked as quickly as we could to try and clear these mountains and get into tree coverage. We were climbing up and all we could see was fog. So we had no idea how tall the mountains were, or when we’d reach and clear the peaks. Shawn was ahead of me hiking with his head down just grinding upward. I thought we were near the top and then before my eyes through the fog appeared yet another peak. I yelled out “damn!” Shawn turned around thinking I’d injured myself. I pointed up ahead of him and he turned back around and looked up. We had no choice but to keep going. So we did.

Once we reached a wooded area it felt like the wind and rain completely stopped. We both paused to take a break, turned back around, and looked out in the open area. The rain was still coming down. The wind was still blowing hard. It was amazing how something as simple as a few trees together could provide such shelter from brutal weather conditions.

We completed 10 miles in 4 hrs. This was really fast for me. Shawn said the same for him. I usually figured about 30 min a mile no matter the terrain. Uphill, downhill, taking breaks, getting water, taking photos, etc. Though it was all uphill, we didn’t take any breaks or stop to take any photos really, and the motivation to get out of the open areas and rain, contributed to our good timing. I did take one video of Shawn ahead of me getting blown all over the place. He didn’t have a trail name yet so I told him it should be “Moon Walker”. Because he looked like an astronaut wearing all blue and wearing his homemade backpack rain protector. He laughed as I showed him the video ?

We finally made it to the official TN border. We crossed back and forth from NC to TN several times. No more NC moving forward. We were now finally in TN, our 3rd State. We passed some farmland with mountains in the distance, but it was still pretty foggy out so the views weren’t great.

We arrived at highway 19E our pickup spot. Vitamin D and Zero Foot were there already. A few minutes later a new guy by the name of Ghost appeared. We spent a few minutes talking about what we’d been through the past few days with the rain and weather in general.

Then a white van pulled up. He said he owned a hostel close by. I asked if his hostel was known for the the amazing big breakfast in the morning for like $10? He said yes but it’s only $8. This guy owned a hostel called Station 19E which is attached to a bar. He was posing as another hostel, his competitor, Mountain Harbor Inn (the one with the famous big breakfast). What I crook I thought. I later found out he has a wildlife camera at the trail head so he can see when hikers arrive at the roadside. Mountain Harbor Inn is a few hundreds yards walk down the road from the trail head. He tries to pick you up before you realize this and walk down to his competitors hostel.

Everyone climbed into the van except for myself and Ghost. I was waiting on my ride to go to Black Bear Resort. Ghost was headed to Mountain Harbor Inn. The van left and my ride showed up. My ride was one the owners from Black Bear Resort. I asked him if he’d take Ghost to Mountain Harbor Inn. He said “sure” and did so at no charge. I thought about the character of these two hostel owners. One snakes hikers away from his competitors, the other drops hikers off a his competitors doorsteps free of charge.

When we dropped Ghost off at Mountain Harbor Inn I saw Uptown there. He said he was taking a few days off to figure out if he wanted to stay on the trail or head back home to NY. We exchanged numbers so we could keep in touch. I got back to Black Bear Resort, showered, and immediately hit the sack. It was a long exhausting day to say the least.