Hiking the AT – The Balds / Over Mountain Shelter 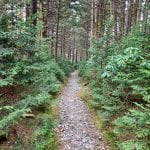 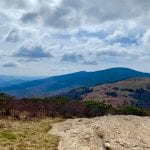 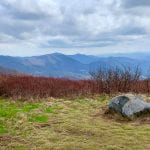 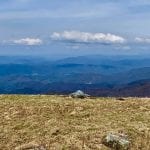 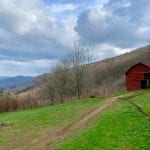 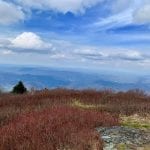 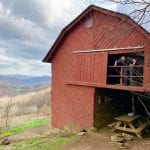 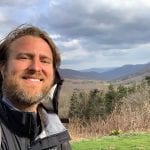 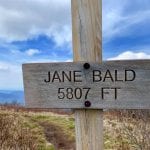 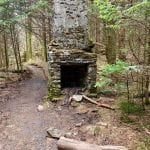 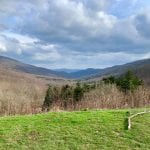 Woke up a little chilly in my tent. But not too bad. Did my morning ritual of breakfast, catching up on work and writing, then packing up my stuff. This morning for breakfast though I didn’t eat my regular cold oatmeal. I wanted to eat whatever was the heaviest food item in my pack. It just happened to be rice and beans. Not the most ideal meal for breakfast. But I’ve started to eat whatever is the heaviest item, not what I desire to eat the most. It’s all about dropping pack weight. Every little bit helps. Especially since I picked up quite a bit of food from Up State the day before.

Vitamin D, Zero Foot and Jazz Hands already left camp. Up and Over was eating breakfast at the shelter. We chatted for a bit before I hit the trail again. There was an immediate climb out of camp. It was really windy. I watched the swaying trees above me as their branches creaked and moaned. I made it a few miles before I was startled by a huge wild turkey flapping its wings vigorously as it took flight right above my head. I don’t know who surprised who most. I guess I snuck up on it.

I was out of water so I had to stop at a not-so-ideal water source. It was a bit off the trail way down a hill. Which meant I’d have to climb back up after getting water. I didn’t realize how far down it was. Otherwise I would have left my pack at the trail and went down without it. I wondered where Up State was. He stopped at the camp site just before the shelter the night before. I figured he should be catching up to me soon. That is, unless he got an earlier start than I did, and already passed me. I came up from getting water and who was sitting on a log right at the trail head? Up State!

I said “there he is” and he smiled and said “thought I’d catch you this morning.” We sat and had a snack together. We climbed Roan Mountain together. It was really windy and cold. There was still snow and ice on top of the mountain. It was a bit foggy so the views weren’t great. We passed the renovated Roan Mountain shelter. It’s the highest shelter on the AT. It was recently renovated because it was in such bad condition. Being up so high it had taken a beaten by the severe weather. We passed an old chimney as well. I later heard there used to be a hotel on top of the mountain called Cloudland Hotel. I couldn’t imagine a hotel being so high on such a remote mountain top.

I stopped to take some photos and Up State got ahead of me. As I got to the bottom of the mountain I passed a young girl and her puppy. The puppy couldn’t have been more than 3-4 weeks old. Way too young to be out in this weather in my opinion. I stopped and talked to her for a bit and told her how far of climb up it was, how cold and windy it was, and that there wasn’t any views really. She continued on anyway. As she walked off she put the little puppy on the ground and he ran towards me as if he wanted to go with me instead. It was the cutest thing ever. I should have taken a few pics of it.

I made it out of the woods into the parking lot. I was at Carver’s Gap. I met an older couple as they were getting out of their car. We said hello. They were also headed up Roan Mountain. I told them about the weather conditions as well. I recommended the balds on the other side of the road instead. Though I hadn’t climbed them yet, the weather was more clear, the views better as well. They added a layer to their outfits and thanked me for the info. Our conversation ended but I was still standing there. I was looking for an place to just sit down. But they didn’t know that. Looking a bit lost and homeless they asked me if I needed anything…water, a snack, a ride into town? I smiled and thanked them and told them I was ok…just needed to sit somewhere ?

There are three balds at Carver’s Gap: Round Bald, Jane Bald, and Grassy Ridge Bald. I climbed the first one and saw Up State sitting on a rock taking a break. I snapped a few photos and grabbed some video of the bald on my way to sit with him. It was really windy. I was getting blown all over the place. We sat and had another snack together. The older couple reached the top of the bald a few minutes later. They saw us and came over to talk to us. We chatted for a bit and they left.

Not but 20-30 min later I decided to check the weather. Oh my! A big storm was headed our way. Rain, lightening, winds up to 50-60 MPH. Up State was ready for a break off the trail. He had reception, which he never had on the AT, so he started to look for hostels and hotels near by. I told him the couple offered me a ride. We thought about chasing them down the mountain to take them up on their offer…but we didn’t. I told him my plan was to make it to the next shelter to get out of the weather. It was 3 miles further. We decided to press on.

We didn’t get up the next bald before Up State stops and yells out he’s got reception so he’s going to try and get a ride to a hotel. He said there’s a 50/50 chance he’ll see me at the shelter tonight. I told him I’d keep an eye out for him as we parted ways.

I made it to the top of the next bald and checked out the view. It was beautiful. The weather wasn’t great but the view was still really nice. I glanced down at the bottom of the mountain where the trail was and could see a bunch of hikers hauling @ss coming towards me. They were so far away they looked like ants. Then it dawned on me. The next shelter was small with only enough room for 6. With the storm coming everyone was trying to get to it to ensure they had a spot in the shelter. I immediately turned around and kicked it in high gear to make sure I could get there ahead of everyone else!

The good news is, I made it to the shelter in time. The bad news was, the wind was blowing into the shelter. And with the wind picking up and rain coming we’d be completely drenched overnight. Jazz Hands and a new guy who didn’t have a trail name yet, Shawn, was there. They said there was a larger shelter just up ahead that’s completely enclosed. As a matter of fact it’s actually a barn. And a pretty iconic place on the trail. It sleeps up to 20 they said. We all decided to press on to it.

It was late in the day already. Several people passed us while we sat at the smaller shelter. More people were coming behind us and I was sure more people were already at the barn shelter. I was concerned there might not be space for all of us. So we rushed forward as fast as we could.

As we got closer we could see the barn backed into a wooded area. Our path to it was a good size grassy field with several camp fire pits. The view off to the side through the valley towards the mountains was beautiful. In the barn bay window stood Vitamin D. He greeted me “welcome Wolverine!” I asked if there was room for us. He laughed and said “yeah there’s plenty of room up here.”

He was right. There’s room in this shelter for 50+ people. There was so much room people were putting up their tents inside the barn. My tent isn’t a stand-alone tent. It requires trekking poles to be inserted in the ground. Which isn’t possible on a hard wood floor. So I rolled out my sleeping pad and bag on the ground, and grabbed my food to meet the others at the table downstairs for dinner.

I met Noodle Harvester, Electrolytes, General Lee, Shawn, Jazz Hands and a few others over dinner. We finished up our dinners and climbed into our sleeping arrangements to try and get some sleep.