Hiking the AT – Walking in a Wonderful Waterfall Land / Giving Birth Asleep? 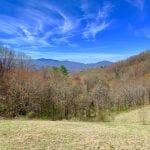 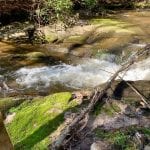 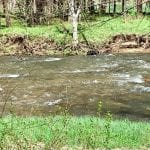 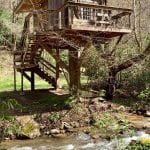 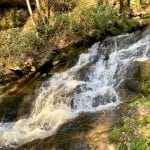 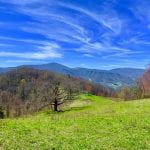 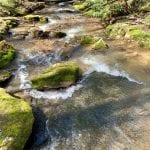 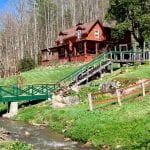 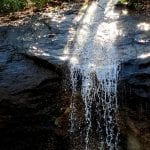 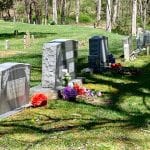 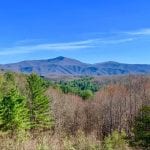 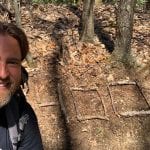 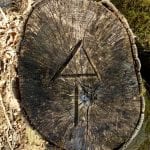 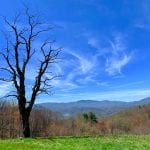 I awoke in a cabin bed so I slept well. I was eager to get back on the trail to see if I could catch up with Uptown and also Snickers. So I gulped down some coffee, quickly ate some breakfast, and hopped in my ride back to the AT.

On the way I was corresponding with Snickers via text to see where we might be able to meet. Just when I thought we had things figured out he informed me he got a call from his wife in regards to an emergency at work that was going to derail our plans. I was a bit bummed but wished him and his wife well with whatever they needed to address and asked that he keep in touch so we could try and coordinate meeting up again in the future. He said “of course”.

When I arrived at Mountain Harbor Inn I asked the owners if Uptown was still there. They informed me they took him to the airport to head back home to NY. He decided to get off the trail for good. I took a big breathe and sighed. Both guys I was looking forward to linking back up with, and hiking with, weren’t here, so I was back to hiking alone again. Sometimes I like hiking alone, but sometimes it’s nice to have someone to hike with. It’s hard to explain but there’s this synergy, it seems like, when you hike with someone else, you help move each other along.

I somehow got myself in a deep conversation with the hostel owner about his business and how his competitor was poaching his customers (hikers) from him just down the road. This lead to a conversation about what line of work I’m in (NicheLabs / Websites / Internet Marketing), which opened a “can of worms.” He had a lot of questions I gladly answered (free of charge of course

🙂) He offered me a seat at their breakfast table.

There were quite a few people partaking in their famous $12 all you can eat home cooked breakfast. It looked amazing. The spread was huge. Eggs, bacon, sausage, fresh fruit, etc. You name it, it was there. I was certainly interested, but I had lost some time getting back to the trail this morning already, and then talking with the owner for awhile, so I declined, thanking him for his offer, and started back up the side trail to the AT.

Still on their property, the side trail led me alongside a nice rushing creek, which had several cabins perched up above it. I didn’t realize they had private cabins at this hostel. That would have saved me some time and money staying here vs Black Bear Resort. With all the hiking we do, there’s only so many hours in the day to do research on where to stay, transportation, etc. And though we have some great resources (GutHook app, AWOLs guide), we’re still limited to what options are available to us. So we do the best we can with the time and resources we have.

I made my way back to the AT and started marching north again. I met a southbound (SoBo) hiking named Colorado. He hiked the AT last year and got sick towards the end of his trek. So he’s finishing his trek this year. It was hot out and got even hotter when the trail passed through an open grassy field. Basking in the sun was Prophet and his tent. He had his tent hanging in a tree drying as it got wet the night before. He was waiting on his buddies City and Pegasus to return from town. I met these guys a few weeks ago at a shelter just north of New Found Gap. Prophet has been on the AT for the past few years?

While hiking I was listening to Mighty Blue’s podcast. He was interviewing the Bear Whisperer. This gentlemen said we all have animal characteristics. To find out what animal you are go to www.animalleadership.com. He also said that bears give birth while hibernating. Isn’t that fascinating? Can you imagine going to sleep for a few months and waking up to a handful of babies clinging to you and feeding!? As opposed to waiting 9 months dealing with pregnancy and morning sickness and going through labor ?

I met a few section hikers. Two women and one man. Tom, the man, didn’t have a trail name yet. The two women, Spirit and Zookie, both thru hiked the AT years ago. They met on the trail and have been friends ever since. They hiked it back when the wild fires were really bad up on NC. They had to take alternate routes because the trail was literally on fire. They were stopping for a break so I continued on.

I passed a pretty big cemetery in the middle of no where. It had a dirt road leading up to it. A big sign read Isaac Cemetery. I also passed the 400 mile marker. This is the first mile marker I’ve seen. I missed the 100, 200, and 300 mile markers. The 100 mark I heard was on top of Albert Mntn. which I crossed at sunset. The 200 mark I heard was on top of Clingman’s Dome which I passed in a blizzard. I’m not sure where the 300 mile
marker was but I didn’t see it either. So I’m glad I caught the 400 mile marker. I’ll be sure to look out for the others moving forward.

I started at the intersection of 19e and hiked to the shelter at Moreland gap. So am 18 mile day. Not bad. This stretch of the trail was one of my favorites. Small bald meadows with mountain views, rushing creeks, a tranquil river, and several big beautiful waterfalls. This was yet another day I felt like I was accompanied by rushing water all day. By the time I got to the shelter it was late so everyone had already turned in for the night. So I setup my tent, cooked, ate and passed out…I was exhausted.