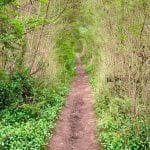 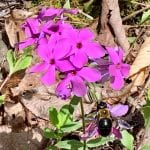 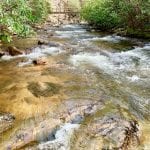 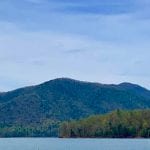 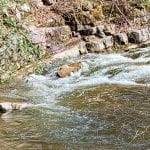 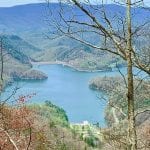 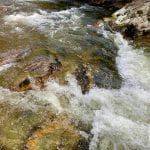 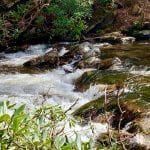 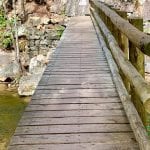 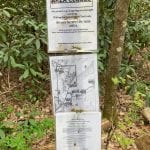 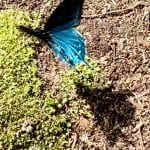 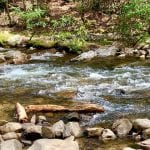 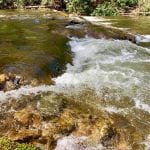 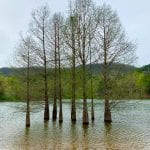 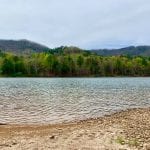 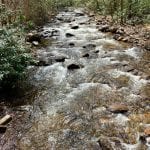 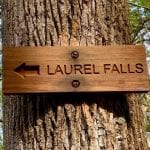 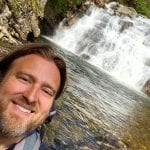 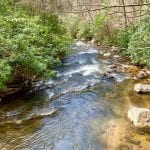 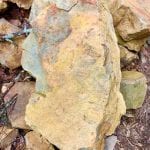 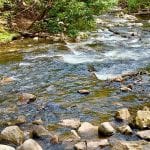 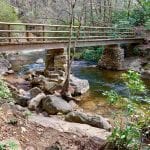 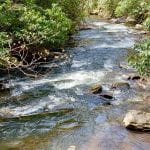 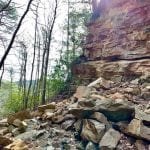 I slept in my tent at Moreland Gap shelter. I was a little slow getting up in the morning. So by the time I emerged from my tent, those who camped at the shelter the night before, I had already packed up and hit the trail. I ate a quick breakfast, caught up on some work items, packed up myself, and started my daily trek.

As I mentioned in my post yesterday, this stretch of the AT is absolutely beautiful. My day started off with me walking alongside of amazing rushing creeks. I came to a long foot bridge crossing the creek. I took some pics and video. I made my way up and through some rock formations that have crumbled inward towards the trail. The rocks were a variety of red, yellow and orange in color.

I came to the Laurel Falls sign and looked down the steep hill where it pointed. “Oh my” I said out loud to myself. I wonder how many people pass this side trail to this view point I thought? Not me. Getting down there wasn’t what I was worried about—- getting back up was. The rock “stairs” were steep and I couldn’t see the bottom at all. I began my descent. Each step I took downward the louder the waterfall became, and my anticipation of what was ahead increased.

I arrived at Laurel Falls. It was breathtakingly beautiful. It reminds me Panther Creek Falls in Georgia. A huge cascade of water falling down into a large pool of water…big enough to swim in. I took lots of photos and videos. I noticed a white blaze leading alongside of the water as it flowed away from the falls. There was a white blaze leading back up the steep rocky stairs to where I hiked down. Two white blazed trails? This was something I hadn’t seen before. I decided to take the trail that was flat and followed the creek. I’m glad I did. For miles, it seemed, I walked beside the water flowing from Laurel Falls. It was so peaceful. I just hoped this white blazed trail led me back to the one I started on.

I passed another hiker going southbound. His name was Too Many. He told me he was hiking to support fallen soldiers who suffered from PTSD. He had names and photos of soldiers pinned on his pack. His name was Too Many as in too many soldiers have fallen. He wants the fallen soldier’s families to know they are not forgotten. We talked about how beautiful the area was and I was beating myself up for taking so many pictures and taking so long. He said “miles don’t equal smiles”. I smiled and told him that was a great saying and I’d remember that.

I continued on and the white blaze trail I was on connected with the one I started on earlier that day. There was a pretty tough climb up a mountain. I was rewarded with a view looking down on Watauga Lake. I made my way down the mountain passing Boots Off Hostel and Campground. The lake was pretty and you could see mountains in the distance across it. I stopped at a picnic table on the beach for a snack and some water. A few minutes later 3 young women walked down, sat their stuff on the ground, stripped down to their bikinis right in front of me, and laid down on their towels ?This was a sight to see. I’ve practically been living in the woods for weeks. They got up and tried to swim in the lake but it was too cold. So they came back. Feeling like a pervert I decided it would be best if I continued on with my hike ?

It’s unfortunate camping on the beach wasn’t allowed. It would have been a great place to do so. I was tired but the real challenge was, the next shelter had aggressive bears, and we weren’t allowed to camp there. The next shelter after that one wasn’t for another 9 miles. I was hoping I’d get to the shelter in 2 miles and others would be camping there already. This would make me more comfortable camping there myself.

I continued hiking passing several warning signs along the way. This was no joke. One sign even said it was against the law to camp in this area. As in you’d be arrested if you were caught camping there. I arrived at the shelter. No one was there. A day hiker stopped there while I was checking the place out. He said he saw a mama bear and some cubs in the area not too long ago. He told me there was a camp site before the Dam I could stay at. It’s just outside of the “do not camp / aggressive bears” area. I thanked him for the info and continued on.

It was starting to get dark and I was really tired. I was getting close to the camp site. I hoped someone else was already there. Camping by myself in or just outside of an aggressive bear area didn’t sound like the safest thing to do. I rounded a corner on the trail and I could smell camp fire burning and saw the flames flickering on the ground just up ahead. Thank goodness. I arrived and met two new thru hikers. A girl, Bruiser, and a guy, Savage. They were a couple hiking the AT together. They welcomed me to their tent site. I told them they sounded like a tag team wrestling duo. We laughed as we ate dinner together. I setup my tent and crashed into my sleeping bag.