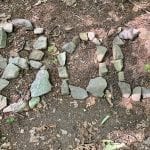 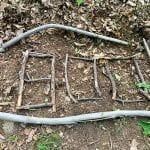 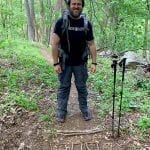 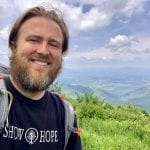 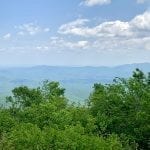 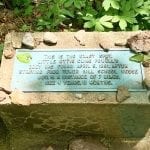 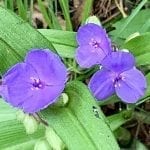 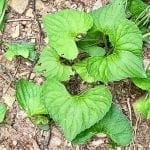 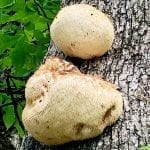 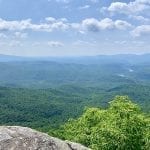 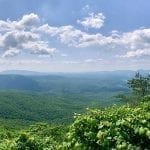 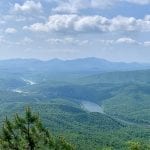 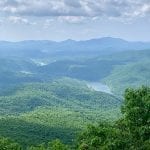 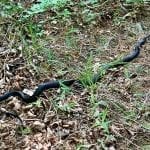 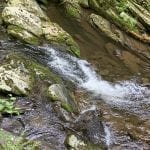 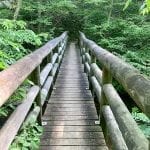 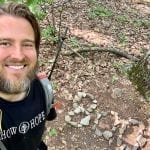 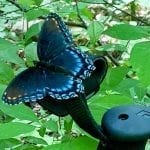 We stayed in a Howard Johnson hotel last night. It was recently renovated so the hotel is in great shape. Another morning of waking up in a big comfy bed– I couldn’t complain. Though I took a shower the night before, I took another one this morning– just in case I missed any of the dirt build up from the previous days out on the trail. Next up on my morning ritual while in town, breakfast. I ventured down to the hotel lobby to dig in. On the menu this morning: biscuits & gravy, eggs, cereal, juice, coffee, donuts, an apple, and a banana. Then back up to the room to get a little work done, then pack, and prep to head back out into the wilderness for a few days.

We were getting an early start this morning– trying to beat the heat. It was myself, Mulligan and the Colonel. The Colonel took us back to where we got off the AT– the James River Bridge in Glasgow, VA. We had a nice 1 mile flat start to the day walking alongside a rushing creek. There was no wind at all so it was pretty hot. Then we started to climb. I was immediately greeted by another long black rat snake. I stopped to take some photos and video. As I got closer to him, he curled up and turned around to face me. Most of these snakes have been harmless and if anything slither away as I got closer. Not this one. He extended towards me flicking his tongue at me. So I slowly walked by keeping my eye on him to make sure he didn’t get any closer.

We had a big 2,000 foot climb today. It was gradual at first but steadily got steeper. We made it to the top and I stopped to take some photos. Its always nice to be rewarded with a view like this after a steep climb. We continued on the trail and started a slight decline. We thought our climbing was over for the day. Nope. We started back up another 500 foot climb. We passed another hiker by the name of Double Check. We stopped and chatted for a few minutes. He was a what they call a “Purist”. A Purist is someone that never strays from the white blaze, they don’t “Slack Pack” either (carry a smaller pack instead of their heavy pack, leaving it behind at like a hostel or something for the day), and they only hike in one direction. Meaning, if you start heading north, you stay north. If you start the AT headed south, you stay south. Myself and Mulligan are definitely not Purists. As long as we hike the entire trail, that’s all that mattered to us. We applauded him for his efforts though as we marched on.

We passed some strange mushrooms growing on the side of a tree, then some pretty purple flowers with these strange pods of seeds hanging from them. We were still climbing. We reached the top and there was a memorial on the ground for an almost 5 year old boy who strayed away from a bus stop years ago and died. He was found 7 miles from where he went missing. I could only imagine what this child went through wandering through the woods by himself until lying down, and passing away. We made it to the top where the several hikers were basking in the sun, taking a break, resting on the remains of an old fire tower. I stopped for a few minute, took a few more pictures, chatted with them briefly, then drifted down the other side of the mountain.

It was several miles downhill until we reached a shelter that had a small pond close by. Mulligan was coming back from refilling on water when I arrived. I took a break, eating a snack, when Mulligan shared some rumors he heard about this shelter. Rumors that it was haunted. Several people, some of which Mulligan knows personally who hiked the trial last year, claim that while camping there, they awoke in the middle of the night from something pulling on their feet. When they looked down to see what it was, they saw a glowing orb. Mulligan doesn’t like ghosts. (like who does?:)) He said if he can’t shoot it, stab it, choke it, he doesn’t want anything to do with it. He said, “we’re not staying here, period.” I chuckled. I didn’t want to stop anyway. I wanted to get some more miles in before calling it a day.

We headed out of the shelter camping area on back on the AT. While doing so, we passed two guys who had a blazing fire going. I shouted out to them, “nice fire!” I really like camp fires but often got to have one. I mean, sure, I could make a fire just about anywhere, at any time, but often we were too tired at the end of the day to make one. So we didn’t. One of the guys names was Monk. He was a super nice guy who packed pretty lightly. He slept in a bivvy (very small almost coffin like “tent”). He always seemed to have a smile on his face and be enjoying himself. I thought about trying to convince Mulligan we’d be safe from the ghost since we had a Monk there but decided against it. We passed Double Check on the way out too. We warned him the place was haunted. He laughed as well as he proceeded to find a spot to sleep for the night.

We hiked for several more hours passing the 800 mile marker. We stopped and took some pics. On our way down we met Snake Eyes and Turnip. They were stopped by a creek getting water. I needed to refill myself, so we stopped, and chatted with them for a bit. Like us, they were trying to find a good place to setup their tents for the evening. This was not a good spot. It was on the side of the mountain– all ground was sloped. I asked Snake Eyes how he got his name. I figured it derived from the GI Joe character Snake Eyes. Nope. He hated snakes. He often was at the front of his pack scoping out the ground for snakes– to ensure he or anyone in his crewed stepped on one.

We told them we were headed down to this area by a swinging bridge. There was a wide creek there and plenty of flat ground to tent on. They said they were headed that way too, so we might see them there later. However, they must have kept going, because when we got there, they weren’t there. It was by an old dirt road. Which wasn’t necessarily an issue. You just have to be cautious around places where people can drive by. Though they could bring trail magic, they could also bring trouble. Because of this we decided to go deeper in the woods to setup for the evening. We found a nice spot right by the creek. We setup camp, cooked and ate dinner, and crawled back in our tents to call it a day. (05/24/19)