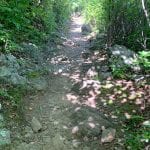 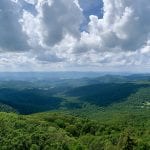 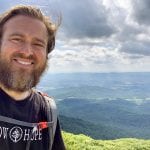 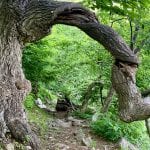 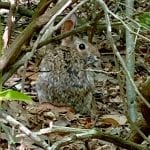 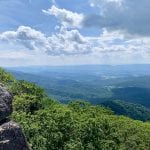 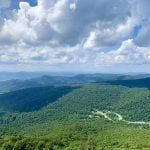 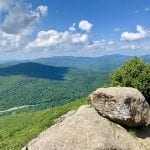 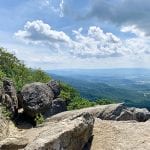 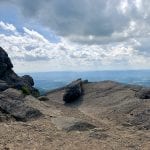 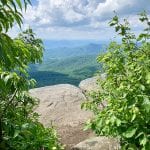 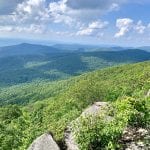 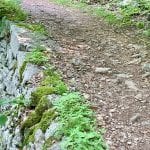 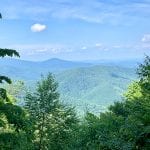 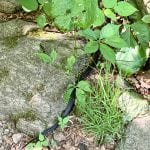 (6/6/19) I awoke in a small twin size bed in Open Arms Hostel in Luray, VA. My room was shared with two other hikers. One man, one female. It’s always interesting sharing sleeping quarters with complete strangers. You never know what could happen. So far my experience has been pretty good though.

I slept pretty well. Though the house the hostel was in was built in the early 1940s. The AC wasn’t working (or so we were told:)), so we left the windows open all night. The breeze felt pretty good. But the house was right across the street from train tracks. And they were active train tracks. So I was woken up several times throughout the night as trains rumbled by. I guess it was better than sleeping in the woods, in a tent, on hard cold ground.

I could smell coffee brewing downstairs. I stumbled out of bed and down the stairs to fetch myself a cup. No one was in the kitchen. They were all gathered outside on the front porch sipping on their coffees and conversing with one another. I went outside to join them. “Through the Wall” offered me a pack of Pop-Tarts he didn’t want anymore. I didn’t even ask what kind and blurted out “sure, I’ll take ’em”. Apparently, he was trying to reduce his pack weight. I figured I’d eat a few and take a few with me.

I wish I had asked “Through the Wall” how he got his name. I could only imagine maybe he ran through a wall or something. I sat and chatted with him for a bit. “Smokey” was also there. I didn’t have to guess how he got his name:) Then another gentleman by the name of “Red” joined us. It appeared as if we had a full house last night. “Smokey” made a comment about how we were super athletes– like pro athletes, hiking 20 – 30 miles a day, 2200 miles from GA to ME. That might have been a bit exaggerated, but I still liked his perspective:)

The hostel owner sounded the van horn and yelled out “time to go”. It was 7:45 AM. The first shuttle was leaving heading back to the trail. Everyone piled in. Everyone except myself and sleeping beauty (Mulligan:) who was still in bed upstairs. I told the hostel owner we’d be ready in a few hours. She said she’d be back by then and could run us back to the trail then, or into town, wherever we needed to go. With my coffee in hand, I ventured back into the house, up the stairs, and plopped down on my bed, to catch up on some work items while I had some privacy and time.

The hostel owner returned from dropping the others off and running some errands. Mulligan got up and we paid for our rooms and discussed our plans for the day. His foot was hurting and he had his video equipment shipped forward he needed to pick up and catch up on editing new videos and uploading them online. We could get some hiking in before making it to the next town to get Mulligan’s video equipment — was the plan. The hostel owner (Allison) took us back to the trail.

We had a few climbs today with some nice views so I was looking forward to it. One of which was up to Mary’s Rock, a 1500 foot climb. On our way up we passed Go Forth and March Forth. We stopped and chatted for a bit. As it turns out, they stayed at the same campground we stayed at a few nights ago. They got trial magic by the same group we did. Burgers and brats, beer, chips, you name it. It was Mike, the pilot, his buddy, and their wives. It was good seeing them. We parted ways, “see you up the trail” we said.

We continued upward until running into Erin, the Park Ranger, we met at the same campground (Big Meadows) a few days ago. She was off duty wearing regular clothes so we almost didn’t recognize her. We stopped and chatted for a bit. There was a big pile of fresh bear poo in the middle of the trail. She stuck a stick in it and smushed it around while telling us about it. It was quite funny how not disgusted she was with it:) She said, “this isn’t a place you’d want to run into a bear. With a steep incline to my right and a steep decline to my left, there’s really nowhere to run or hike for that matter, except on the trail. So either you retreat, try to get the bear to, or you sit here and stare at each other.” She made a valid point. I just hoped, at this point, I didn’t run into one.

We traveled across several mountain peaks with decent views until making our way to Mary’s Peak. It was quite a view. On this clear day, you could see for miles. When we got there, there was a small group of 10 – 15 older female section hikers. They asked us if we were thru-hiking. We told them we were. Then came quite a few questions: when did you start, where did you start, what’s your trail name, etc. Then asked if we wanted some peanut M & M’s. Of course, we said. We thanked them. They continued on their way and we stopped and took photos and videos.

I ran into a really cool tree with a huge bent branch hanging over the trail. With a green tunnel of foliage leading down the trail behind it. I, of course, stopped and took more photos. As we made our way down the mountain we saw another black rat snake, a rabbit and ….. another bear! Good thing he saw us first and was able to run away so we didn’t get stuck on the trail with anywhere to go. We made our way to a road and caught a ride back into town. Mulligan was able to grab his video equipment from the post office before they closed. We checked into a hotel and walked across the street to a place called Spelunkers for a burger and custard for dessert. It was pretty amazing. Either that or we were just starving as usual. We went back to the hotel so Mulligan could catch up on his video work, and I could catch up on my business work.

While Mulligan was going through his videos he pulled up some footage from when he and his two sons hiked the Mountains to Sea trail in North Carolina a few years back. You could tell he really loves his kids. It was around New Years and fireworks were going off. Mulligan was in the service for many years as a Marine. Though we never spoke about it, I could tell he spent a lot of time in battle (shooting guns). His two boys knew he didn’t like fireworks. As the fireworks exploded around them, his boys asked him, “Daddy, are you okay?”

Then we watched a video of him leaving the trail last year during his attempted thru-hike. First, leaving because his father passed away. He came back, only to receive more bad news from his wife, who was filing for divorce. He left the trail for good at that point. That’s why his trial name is Mulligan. A “Mulligan” is a second chance to perform an action, usually, after the first chance went wrong through bad luck or a blunder. So he’s back this year and will be finishing the trail this time.

Next thing we knew, sirens were screaming outside our hotel. People were crowding around. There was quite a commotion. Mulligan went to go see what was going on. There, on the street, lay an older lady, who got hit by a car while crossing the road. She was dead. Yikes, what a way to end the evening…