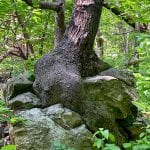 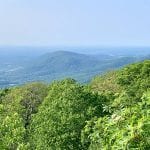 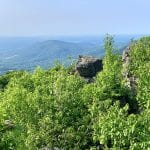 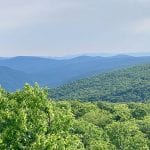 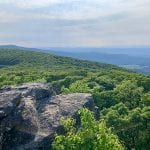 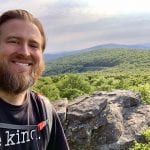 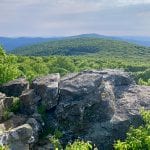 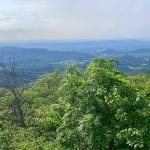 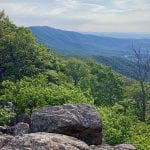 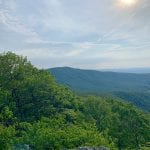 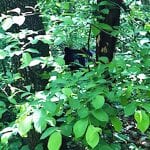 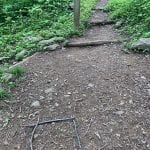 I awoke in a big comfy hotel bed. This is was a nice change after sleeping on the ground in my tent the last few nights on the trail. I took a hot shower– which felt amazing. Then went downstairs to the lobby for breakfast. I demolished 2 bowls of cereal, 2 honey buns, 4 waffles, and grabbed what I thought was syrup. It ended up being peanut butter. I went ahead and spread it on my waffles anyway. I still needed syrup though. I found a bottle and drenched my waffles. Peanut butter and syrup on waffles, I thought? It was pretty actually:) I pounded some orange juice and grabbed a few cups of coffee and headed back up to our room. Mulligan was up, I tackled some work while he took his turn on the breakfast buffet down in the lobby. He returned to room, we packed up, checked out, grabbed a few food items at a store close by and caught a ride back to the trail.

We ran into Walden, Thumper and Thermia at the trail head. They were getting off the trail, heading into town. They all hike pretty fast. How did we get ahead of them? Oh yeah, we caught a ride and jumped ahead north, to head back south to the same campground as MP said he’d take us back once we got there. I saw Thumper, a late teen / early 20’s something year old female, throw her thumb out on the side of the road, an old truck roared by and came to a screeching stop. She, Walden and Thumper all piled in the back, and they were off. To see a young lady hitch hike without fear was pretty amazing.

We were going to see a lot of people heading north over the next few days, as we headed back south. Sometimes people head south to avoid steep climbs. Again this isn’t why we jumped ahead. We wanted to take a zero in town and the closest one was north and had a ride there to drop us off to start, and then again once we hiked back, MP would take us back to the same spot to head north again. As long as we’re hiking all miles, we didn’t care which direction we were heading.

Heading south didn’t really work out in our favor as far as avoiding steep climbs was concerned. We had a good 10 – 11 miles of uphill to go today. Though, again, Shenandoah National Park isn’t really that hilly– its mostly flat. Though we were headed uphill most of the day, it was a gradual incline, so it wasn’t too bad at all. At the start of the trail was trail magic. Someone left a cooler with water and soft drinks. Since we literally just got on the trail, we didn’t partake in this trail magic. We figured folks heading northbound, who have been in the woods for days, would certainly appreciate it more than us with our full bellies.

We hiked 6 – 7 miles and came to another parking lot. Wow, trail magic again. This is twice in the same day. We still felt a little guilty partaking in these goodies, but we did just hike quite a few miles. So we stopped and had a Twinkie and a Pepsi. I chuckled to myself…when is the last time I had a Twinkie, I thought? 🙂 The lady who was handing out the trail magic had a trail name herself… Mrs. Gator. Oh boy, let me guess, she’s from FL? Her husband was currently thru hiking the trail. His name was Gator. Yup, they were from Jacksonville, FL. How awesome was that? The wife was there supporting her husband while he hiked up the trail heading north. Gator showed up a few minutes later.

Mrs. Gator was there to pick him up. He was actually getting off the trail. Not for good, but to head back home to FL to get some test results. He battled cancer recently, and won. He told himself if he survived, he was going to go hike the AT, which he always wanted to do. And here he was now, living out his dream. Mrs. Gator had a list of thru hikers that signed her book that she met while giving out trail magic. This day wasn’t her first. She setup and provided a bit of trail magic in GA as well. I read the list and recognized quite a few of the people on there. It was nice to see they were still on the trail. We chatted for a bit and then thanked them and started to continue our way south. Before doing so a couple of day hikers came out of the woods. They asked, “did you see that bear back there?” We replied “no!”. They showed us their photos. It’s like the bear was up close and posing. Man, we just missed another bear, I thought 😐

We got back on the trail and marched forward. We hiked for several miles before I heard a loud rumble in the woods. Then I saw a lady coming towards me. I asked her if she just heard that noise? She said, “I did. I just started a bear and he darted off into the woods.” She then told me there was another one she saw about a quarter of a mile back, and he just sat there and watched her walk by. She said if I hurried, I should be able to see him. So I did just that. I thanked her for the info and scurried along.

I didn’t get 20 feet before I saw my first bear. It was the one that she’s startled and darted off into the woods. He stopped and turned around to watch us. I could see his heads sticking up through the bushes. I took my camera out to take a picture and …. he ducked! Little rascal! Okay, maybe he wasn’t so little. Big rascal! I talked to him and whispered “sweet nothings” to him but he wouldn’t come back out to play. I figured I’d better hurry to go see the other one that’s not so skittish. Armed with my camera in hand, I inched my way forward, scanning the woods, walking ever so slowly. But nothing. I was bit bummed as I continued on. I did see a bear though, so that was good. I just didn’t get a photo.

I hiked forward. A few miles further down the trail I heard more rumbling as another bear darted off into the woods. He wasn’t but 50 feet away from me. I stepped off the trail into the woods and walked about 15 feet towards him. I had my camera in hand, trying to get him to come out. But nothing. I figured I probably shouldn’t go any further. Chasing a bear into the woods is not the smartest idea. I continued on. After a few more miles I ran into… Show Me! It was great to see him. He was hiking with Bilbo, whom I met a few times over the past couple of days. Show Me…. showed me his bear pic. It was a nice shot of a big bear. It was doing the same thing the one I saw did. Hiding in the bushes, peering back at him, through the leaves.

Show Me was making good time. I figured I wouldn’t pass him until tomorrow. He was going to end up in Fort Royal a day earlier than he planned. He said he was going to take a zero there and then finish off the week at a little slower pace. I figured we’d catch up with him for sure. We parted ways, me heading south, as they headed north. I passed a few views, so as always, I stopped and snapped a few photos. I passed two guys and they blurted out “just saw a bear back behind us.”. I tried not to look too excited as a picked up my pace. I passed another couple and asked if they saw the bear. They said “no but we saw 3 earlier today.” I “Grrrrrr” growled beneath my breath. Why is everyone seeing bears but me!?

I came to an intersection on the trail. Mulligan was a head of me. We agreed to make a symbol out of sticks at a shelter entrance if we got off trail. A way to tell the other where we were. Mulligan left the symbol here so I knew he had gotten off trail. I chuckled, “this is the way the cave men used to do it probably.” 🙂 I made my way down to where the shelter was. There were quite a few new faces there. Someone made a comment about my pack, “is that the new XYZ pack?!? They blurted out. I say XYZ as I still don’t even know the name of my pack:) It was lighter, that’s all that mattered. When the hiker asked, I looked at the logo on it, looked back at him, and replied, “why yes it is!” Apparently my upgraded pack was a good one. I felt like one of the cool kids now 🙂

I setup my tent, grabbed my food and cooking utensils and headed back to the shelter and table where everyone was eating dinner. I met a couple, who were hiking the trail together. Their names were G Pack and B Pack. G as in Girl and B as in Boy. Though I questioned the creativity of their trail names (internally in my head), I knew Wolverine wasn’t super original either, so I kept my thoughts to myself. They were really nice though– that’s all that mattered. They told us a story though, that was a bit shocking. It was of a sighting of guess what? Yup, a bear. But not just of a skittish bear running off in the woods. Something much more terrifying.

They were hiking along and saw a mother deer dart across the trail. Then seconds later she darted back across the trail. Then they heard a wild crazy gut wrenching squealing cry. They looked up and saw a huge bear with the mother deer’s fawn in its mouth. The fawn squirmed frantically until the bear clamped down on it with its massive jaws and killed it 🙁 I could have probably gone without hearing that story. How sad I thought. But this is nature– this is wild– these animals do have to kill each other to survive. I wondered, if this fawn, was the same one the other thru hiker showed us videos of, where he was petting it. The ranger we met told us the only way fawn’s can protect themselves is, to duck down and hide. They don’t have a smell, so bears or other predators can’t find them. However, if this hiker petted the fawn, he would have left his human scent on it. Oh man, that was a horrible thought….

I finished eating and returned to my tent. Space Jam and Orange showed up kind of late. We met them and camped with them a few weeks ago. They found some space on the ground close to Mulligan and I and setup their tent. Because of the limited amount of space available, and the size of Space Jam’s tent, they decided to share her tent. We chatted for a bit before retiring to our tents for the evening. I caught up on some work items before falling asleep.