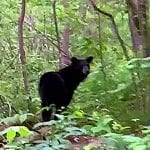 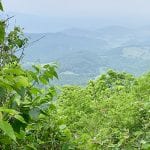 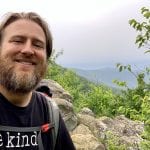 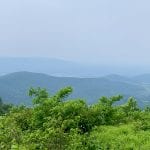 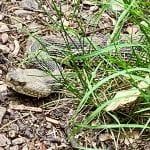 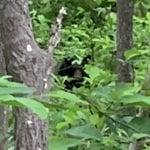 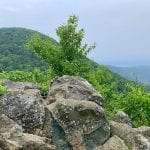 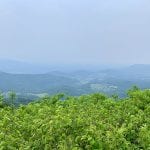 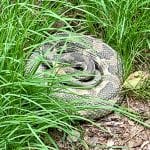 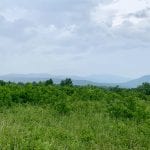 (6/5/19) I awoke in my tent. It was only 5AM. I slept fairly well. It got a little windy at night but it wasn’t too cold. It felt pretty good actually. By 6AM I could hear quite a few people rustling around and packing up. I ate my oatmeal and protein bar and started packing up myself. I had quite a bit of work to do so I knocked that out. I finished packing up, climbed out of my tent, and noticed everyone had left except for myself, Mulligan, Space Jam and Orange. I bid them farewell, refilled on water at a nearby creek, and hit the trail.

I was afraid with everyone hitting the trail before me that I wouldn’t see any wildlife. I totally forgot everyone else was heading north, and we were still heading south, back to the camp ground to get a lift north to Front Royal. So the woods were really quiet. I hiked for several miles and didn’t see a soul. As I hiked, I thought about how everyone else was seeing so many bears. They’d see them right before we got somewhere, or right behind us. I was hiking pretty fast and covering a lot of ground. I thought.. what am I doing wrong? Perhaps I should try something different. Perhaps I should just… be still.

So I found a large rock just off the side of the trail. I took my pack off and plopped down. I just sat there, in the woods, in the middle of nowhere, by myself, and just listened. I was super still. I just focused on my breath, and listened to the birds singing, the rustling of the trees as the wind blew, and the squirrels jumping around me. I sat there for what seemed like eternity. Though I’m pretty sure it was only a few minutes. Then everything got really quiet. My ears perked up and focused intensely on what sounded like something very large coming right behind me. Snap, crack, I could hear twigs and branches breaking as something fumbled towards me. I slowly turned my head around…and there it was, a large black bear.

I turned completely around and lifted my camera to snap a picture. I took a few. He definitely saw me now. He just stood there, for about 10 seconds, staring at me, while I stared back at him. He was about 25 feet from me. I took my eyes off him for a split second to turn on the video on my camera and he darted off running into woods. He ran about 50 – 60 feet away, stopped, turned around, and watched me through the bushes. I hoped he’d come back out so I could get some better photos and videos. I waited a little awhile but he never came back out. So I told him I appreciated him letting me get some photos of him, apologized if I startled him, and then headed back up the trail.

I hiked up and down the rolling hills for about 6 miles. There were some decent views. It was a bit cloudy though, so you couldn’t see as far as usual. I took a few shots anyway and marched on. Mulligan caught up with me. I told him about my bear sighting and asked if he saw any himself. He said he hadn’t. We made our way to the next wayside. That’s one great thing about Shenandoah National Park– they have these little stores / restaurants along the trail. You could almost get away with carrying no food in this park as there’s so many of these. You can definitely hit one every day.

We stopped in for some breakfast. We ordered eggs, sausage, toast, hash browns, a cinnamon bun, and some coffee. While we were paying, the cashier told us about a big thunder storm coming soon. She said it should be here before noon. They were expecting rain all afternoon too. We thanked her for the information, grabbed our food, and headed outside to eat at one of the park tables. Blue Jay and Ember were there, Derby too. Then Snake Eyes and Turnip showed up. We all ate and caught up, sharing bits and pieces of our adventure, over the past few days.

Another hiker came out and told us some guy was being really rude to the lady at the register taking people’s orders. It was a guy we met at our shelter the night before– a day hiker. He was pretty loud at the shelter last night as well. Apparently he was yelling at the lady taking orders and pointing at her demanding a hamburger. It wasn’t lunch time yet she told him. It sounds like the incident got pretty heated and one of the big cooks had to come out of the kitchen to shut him up. He did finally calm down.

We saw the guy come out with his food and sit at another table a bit away from us. He started eating. A few minutes later a guy comes out of the restaurant, hops on a riding lawnmower, and starts cutting the grass. We thought, what a strange time to be cutting the grass, especially while people are out here trying to eat their food. Then we noticed he was only cutting grass and circling the table where rude guy was sitting and trying to eat. We then realized what was going on. We all burst out laughing! It was too funny. Don’t ever upset the people cooking your food. Especially if they have a lawn mower and the only place to eat is outside 🙂

We finished our meals and with full bellies knew it was time to get back at it. We told everyone we’d see them up the trail. It just wouldn’t be anytime soon, as we were still heading south, for the next few days. We took off back into the wilderness and hiked on. Mulligan, as usual, got a little ahead of me. All was well until I heard Mulligan yell out loudly and make a strange noise. I yelled back as I couldn’t understand him and picked up my pace hurrying towards him to make sure he was okay. I ran up to see what was going on. Mulligan was still standing. With camera in hand pointing at the ground cautiously keeping his distance from whatever he was taking photos of. I quickly walked towards him. He says, “stop, be still.” I stopped in my tracks and right in front of me, between myself and Mulligan, was a….. Timber Rattlesnake.

It’s body was hidden in the grass and its head was barely sticking out on the trail. You could barely see him. It just look like a rock on the side of the trail. Mulligan said he came inches from stepping on it. He yelled because it startled him and jumped quickly once he realized what it was. With one of us on each side of him, the rattler let us know he was there, and wasn’t happy. He vibrated his tail. It sounded like a lawn sprinkler. We were concerned someone else might come hiking along and step on him or get too close to him and he’d attack. So I picked up a log laying nearby and tossed it at him. Oooops! The goal was to throw the log next to him to scare him so he’d slither off the trail. With my “amazing” aim though, the log landed right on him. THUD! He coiled up with his tail in the air now rattling violently! Oh man, now he’s really mad.

After contemplating for a few minutes about what to do, we decided to put some logs on the trail, one on each side of him. Mulligan pulled out his yellow, waterproof notepad, and wrote “beware of rattlesnake”, along with the date and time. We placed one of these notes on each side of the snake. We just couldn’t imagine another hiker coming along and getting bit this far out in the woods. It literally could be fatal. As we were about to leave, another hiker came flying up the trail. She was all of maybe 5′ feet tall, 100 lbs, hiking by herself. Her name was Tinker. We pointed out the snake to her. She, like us, blurted out “how cool!”, and snapped several photos and videos. We stood there admiring this creature for a few more minutes, she thanked us, we parted ways, and marched on.

Rain started spitting down on us. We were under the trees for most of the day though so it wasn’t too bad. We could tell it was getting worse though. We passed 4 rangers working on the trail in the woods. We told them about the rattlesnake we saw a few miles back and that we put notes on the trail to warn other hikers. They thanked us and then warned us about the big storm coming and we should take cover soon. We made it to a road where a truck was parked with a cooler of water in it and a sign that said “free, please enjoy”. So we did. We assumed the truck most likely belonged to the rangers we just saw in the woods. The sky darkened and rain started to fall more heavily.

We weren’t close to any shelters so we thought we might want to check our app to see if there were any options for hostels close by. We struggled a bit with reception but finally found one not that far away. They only picked up from the next road though… in 2 miles. We called, made arrangements to be picked up, and marched forward. We passed Poker Face. I was surprised as she was probably in her late teens or early 20’s and hiked pretty fast. She said she took a few days off to visit with family. She got her name from not talking a lot. I told her about the rattlesnake up the trail a ways. Her eyes widened almost to say “cool”. I then warned her about the big storm coming. She then looked at me like “you think?” I smiled, these youngsters, I thought. She asked why were heading the wrong way. I explained and told her we’d probably see her again in a few days… and then parted ways.

By the time we reached the next road the hostel owner was there already to pick us up. We hoped in and were off. We arrived back at the hostel, the owner showed us around, explained the rules, and told us she was taking everyone into town to grab dinner later. Mulligan showered first. As I waited I chatted with several other hikers on the porch. I met “Red” and “Through the Wall” and I guy who wasn’t thru hiking named Dan. He was about to launch a spiritual healing business. There was no shortage of interesting people on this adventure I thought.

There was a scale on the porch. I removed everything from my pack and weighed it. I was happy to see it weighted exactly what it was supposed to… 2.5 lbs. My original pack was 5 lbs. That might not sound like a big difference, but it really is. I then piled everything back in the pack and weighed it. It weighed 21 lbs. This included my laptop I was carrying for my business work. Without food and water this was my base weight. With food and water it weighed 26 lbs. This was a great improvement as when I started my pack weighed over 40 lbs! I showered next and we went into town for dinner. We all plowed through our meals as got to know each other a little better. We returned to the hostel, hung out for a bit, and then crashed in our beds. We were all exhausted. We finished the day at 16 miles. Not bad, not bad at all.