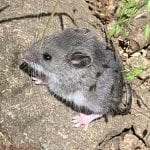 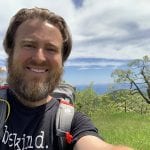 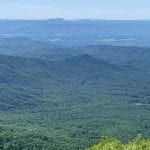 (5/21/19) I awoke in the campground cabin bunk bed this morning. It was actually a little chilly. Which is a surprise seeing how it was so hot last night when we went to bed. We had the AC running on full blast set on 60 degrees all night. That might have had something to do with it:) I got up and bumped the temp up to 70 degrees and figured I’d go ahead and start my day. Like a lot of places we stayed at, that weren’t traditional hotels, the internet and phone reception was pretty spotty. So I grabbed my computer and a few things and went to the building where the food was served, as they had a common area attached to it, I could setup in, and get some work done. It was still fairly early so I didn’t have to worry about bothering anyone.

To my surprise there was someone already there eating breakfast. I didn’t think the store opened before 8AM. I was happy to be wrong about that though, as they had coffee brewing, and breakfast already cooking on the stove. It’s amazing how good a cup of coffee is when you haven’t had any in days. I took my coffee and headed back to the common area. The hiker I saw there before was gone. This was nice as I actually had a business call scheduled at 7:30AM. Again, I didn’t have to worry about disrupting anyone.

After my call I plowed through several other work related items before returning to the kitchen for breakfast. I had eggs, sausage, hash browns, and …. gravy and biscuits:) The food was really. Either that or I was just really hungry. This was exactly what I needed as I was getting back on the trail today, and had several big mountains to climb. I finished uo my work by the time Mulligan arrived in the common area to eat. We discussed our plans for the day, settled our tabs at the front desk, and headed back to our room to pack up. Unlike the previous day, we were back to getting a late start again. So we had another day of battling the heat to look forward to.

We caught a ride back to the trail. We had a 3000 foot climb to start our day. It was brutal. We crossed Black Rock Overlook and soon arrived at forest service road 812. There was a side trail that led to Apple Orchard Falls. I’m really big on taking side trails to see as much of the AT, and surrounding area, as possible. But this was 1.25 miles away. Which meant 2.5 miles of non-white blazed trail added to our day. If you skip something, the chances of coming back and seeing it later on your hike, or anytime in your life really, is slim. But we agreed it was too far out of the way, and after our late start, we just couldn’t justify taking this side trail. I was a bit bummed, but we pressed forward.

Next up, another 1500 foot climb, up to the top of Apple Orchard Mountain. Shortly after we started our climb we ran into Derby again. We hiked together for a little while. Up on top of the mountain was a weather radar station. It was this massive white ball structure that looked like alien spaceship. I snapped a few photos and continued down the other side of the mountain. The Guillotine was just down the hill a ways. It’s a rock formation with a big boulder wedged between two stone walls. We snapped a few photos, Mulligan grabbed some video, and we continued down the hill.

We made it to Thunder Ridge Overlook and stopped there to admire the view. I met a couple of day hikers, Craig and his wife, and chatted with them for a bit. I offered to take some pics of them. They asked about my journey and said they’d look me up online later (and they did:)) Mulligan, Derby and two new hikers caught up with me as I admired the view. The two new hiker’s names were Orange and Space Jam. We hiked together a few miles downhill then to a steep 500 foot climb to the top Highcock Knob. Another mile downhill and we arrived at our camp site we were staying at for the evening.

We threw our packs down and went to refill on water just down the hill at a creek. While there I saw a tiny mouse. I can’t believe I saw him he was so small. He was super cute:) I thought about scooping him up and tossing him on my shoulder to see if he’d hike with me for a few days. Something tells me he wouldn’t have lasted more than a split second on my shoulder. That is, of course, if I could even catch him to get him there. So I settled on just taking a few photos of him instead.

Back up at the camp site there were deer everywhere. There was something in the bushes they liked. And it appeared as if they’d been here before, and had a lot of experience around hikers. They kept their eyes on us as they grazed, but let us get within 10 – 15 feet of them, to take photos and video. We setup our tents, cooked and at dinner, chatted for a bit, then retired to our tents for the evening. One thing that came up over dinner was one of our new female hiking friends we just met had a $800 tent! I just couldn’t get over how much some thru hikers spent on their gear. I’d say the majority of people I met spent $300+ on their tents alone. I caught up on some work items and journaled a bit before curling up in my sleeping bag and falling fast asleep.