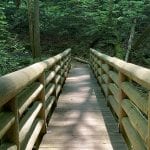 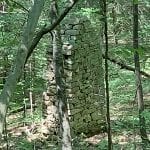 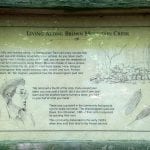 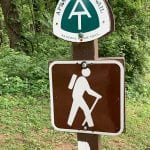 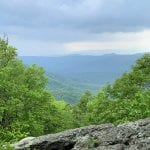 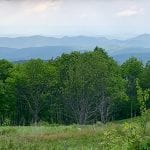 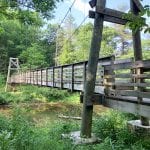 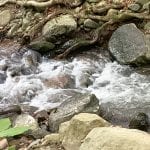 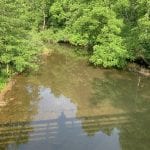 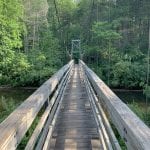 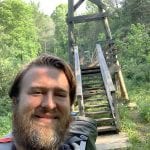 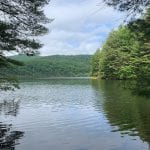 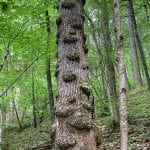 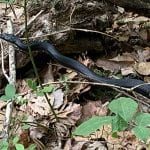 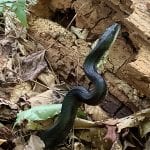 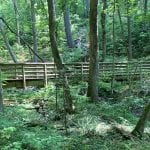 (05/25/19) It was so hot last night in my tent I went to bed in my shorts and a t-shirt. At some point in the middle of the night I got cold, so I slid into my sleeping bag for warmth. I awoke before dawn but was able to fall back to sleep. The sun came up around 6AM. I was up myself shortly afterwards. I had a quick bite to eat, packed up, and emerged from my tent. Mulligan was already up as well. We finished packing up our stuff and headed out about at the same time.

We started out on fairly flat ground today– which was nice. We knew we had a pretty big climb later in the day. We had a similar climb yesterday, but today was supposed to be worse. We followed the trail around a lake reservoir. There were creeks flowing down into the lake in several places. We saw not one, but two, big black rat snakes. We stopped and took pics and videos of them. It seems like the warmer it gets, the more snakes we see. Though these ones are harmless, we’ve got to keep our eyes out for the ones that aren’t.

We arrived at a shelter. It was nice. It was perched up on a hill with a decent size creek flowing down below it. The creek would be a great water source for anyone camping at this location. Mulligan and I both stopped and had a snack and refilled our water bottles. Just on the other side of the creek was the remains of an old colony of people that once lived in this area. There were stone walls everywhere, and a few chimneys from where homes used to be. It’s amazing to think people used to live this far back in the woods. This area was called Brown Mountain Creek. Its inhabitants were freed slaves.

Next up was the big climb. It was tough, really tough. The toughest climb I can remember actually. I’d say its right up there with Albert Mountain back in NC. This mountain was called Bald Knob. It was a 2500 foot climb. Exhausted and drenched from sweat we both reached the top. Mulligan stopped for lunch, so I joined him. We finished up our meals and headed back down the other side. We ran into a Girl Scout troop of about 30 girls and their adult leaders. We stopped and chatted with them for a bit. They were doing something they called “Pack, Paddle and Pedal.” They were doing the back packing part today. The “paddle” part was canoeing or paddle boards, and the “pedal” part of bicycling. It sounded like fun. It’s nice to see the younger generation out here enjoying the outdoors.

We reached the top of another smaller mountain and hiked out into a big grassy open meadow. Out of the tree line we could feel that the wind was really picking up. Before we knew it dark clouds were moving in above us. We didn’t have too much further to go to get back into another tree line on the other side of the mountain. As we scurried along, out of nowhere, lightening cracked behind us. We picked up our pace a bit. As Mulligan called it “double time”. Which I believe is a military term for picking up your pace. IE: moving twice as fast as you were. Thunder rumbled shortly after. The last place you want to be is in an open field on top of a mountain in a lightning storm.

I could hear the rain showering down behind us. It was getting closer and closer and closer until it caught up with us and down it came. I took shelter under a small tree, dropped my pack, grabbed my rain coat, put it on, and pulled my rain cover over my pack. Not without getting everything wet first. I threw my pack back on and drudged forward. I passed some teenagers that were up there for a picnic. They weren’t equipped for the rain and got pretty soaked. They appeared as surprised as we did– the storm came out of nowhere. I made it to the other side of the mountain and into the tree line for shelter. It always amazing me how much trees protect you from the rain and wind. It’s almost like stepping inside a building.

Not even a half hour later and the storm passed and the sun was back out cooking the moisture from the ground like a sauna. I peeled my rain gear off and packed it away and continued down the other side of the mountain. I arrived an area we discussed camping at. I didn’t see Mulligan though. I searched a few camp site areas but still nothing. Then I saw his pack resting up against a tree. He must have went to get water. I set my pack up next to his and ventured down into the woods following the blue blazes to find him….and some water for myself.

I pass Mulligan coming back on my way down. He said its pretty far but it’s a great spring and super cold water. I point out a nice camp site that’s closer to the spring and we agreed it would probably be a better place to setup camp. It was closer to the water and further from the trail thus being more private (quiet). On my way back from getting water Mulligan had gone back to where we left our packs close to the trail and brought them down to the new, closer, better camp site. ‘Twas nice of him. I thanked him of course. The only downfall was locals had camped here recently and there was toilet paper everywhere 😐

We setup our tents, then a close line, to hang our clothes out to dry. We cooked and ate dinner discussing the day’s events and plans for tomorrow. We climbed into our tents and shortly after heard a couple looking in our area for a place to setup their tent and camp. Mulligan greeted them and pointed to a few places that might work. They agreed with this recommendation and got setup. A few hours later, before falling asleep, we heard thunder again. So we got up and pulled our clothes off the line and into our tents with us. Better safe than sorry in case it rained overnight. It was still fairly early so I caught up on some work items before falling asleep.