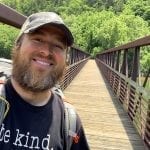 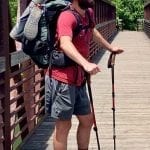 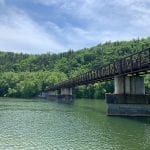 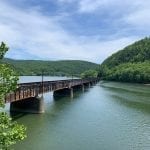 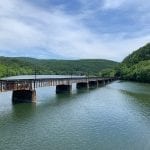 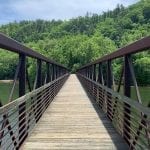 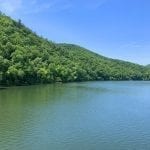 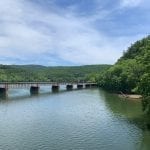 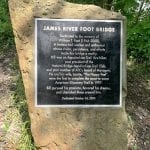 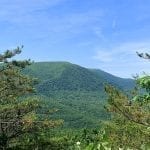 (05/22/19) I remember the temperature dropping last night while we were eating dinner. We didn’t have a fire going as we all agreed we were just going to eat and climb into our tents and call it a night. It was myself, Mulligan, Derby, Space Jam and Orange. We were eating, chatting about our daily events, plans for the next day, then all of a sudden, it got cold, really cold. The temperature continued to drop overnight. I remember waking up a few times chilled to the bone. Which meant a cold morning, and being unmotivated to get out of my sleeping bag, and tent, and start my day.

But as I often said “the trail ain’t gonna hike itself!” So I slowly collected snacks and water and my laptop, pulling these items into my sleeping bag, to stay warm. I ate, got some work done, and finally emerged from my tent, and started packing up my stuff. To my surprise, everyone was still there, and Mulligan was actually up and already packed. That was a first:) We chatted briefly about our destination for the day, Glasgow, VA., and Mulligan was off. Derby wasn’t too far behind him. I got water and said “see you up the trail” to our new female hiking friends, Orange and Space Jam, and hopped on the trail.

I caught up to Derby pretty quickly. Which was surprising. But then again he wasn’t moving too fast this morning. I asked him if he was still warming or something, as he typically hikes faster than I do. He said he was just easing into it today. As I started to pass him I slowed my pace some so we could hike together and chat. We hiked most of the day together, chatting, getting to know each other a little better. He told me about an experience he had on the AT… he was lucky to still be out there.

A few weeks back, he started feeling really bad. He was fatigued, had a major headache, chills and a fever. We all feel fatigued out here hiking as much as we do. And headaches can be caused by a lot of things. One of which is dehydration. Which again, is pretty common out here, with all of the hiking we do. But with the chills and fever, that’s when he knew he needed help. He knew his body was trying to fight off something. He knew it wasn’t a common cold too. He contacted a friend, who was a doctor, he asked him quite a few questions and was able to diagnose the issue– he had lime disease.

Lime disease is something we all fear out here on the trail. Its very common. We’re hiking most of the day, but when we’re not, we’re sitting on rocks, logs, the ground, shelter floors, etc. Any of these places can have ticks. Even when we’re hiking, we have to be careful about brushing up against long grass and branches. Ticks like to hang out there waiting for deer, other animals, humans to come by, and then they latch on. Just because you get a tick on you doesn’t mean you’ll get the disease. And even if a tick bites you it doesn’t mean you’ll get the disease. The tick might not even have the disease, but its recommended that if you have a tick on you (has bitten you) for more than a few hours, some say 24 hours, you should get checked out by a doctor.

Derby’s doctor friend was able to get him a prescription, which he got off trail, and filled immediately. He started taking his meds and was feeling better after a few days. He waited a few more days before returning to the trail though, just to make sure he was well enough to hike again. He had to be careful of sunlight as the meds he was on made him sensitive to sunlight. So he put on sunscreen regularly to protect himself from getting burned. I thought it was pretty amazing he was back out here hiking. Lime disease is very serious, especially if not treated immediately, and it takes quite a few people off the trail each year. But here was Derby, back on the AT, marching forward, to finish his trek. Impressive!

There was a climb out of camp but it wasn’t too bad. It was fairly gradual. There were a few views but most of them were blocked by trees. We stopped and took a few pics where the best views were possible. Then we came to a pretty long downhill all the way to the James River footbridge. We passed a really nice shelter on our way down. There were a few other hikers there so we stopped for a quick snack. One guy’s name was Ultra. He was an Ultra Marathon runner from France. He did look a little different. He was wearing small Spandex shorts. He was doing big miles and surely would finish the trek before me. We finished our snacks and parted ways.

The last couple of miles to the bridge were pretty flat which was nice. The bridge was really cool. It was long. Maybe even the longest footbridge on the AT @ 623 feet long. It runs parallel with another bridge for trains. A few trains passed while we stopped to take photos, chatted with some local hikers, and crossed the bridge ourselves. Derby had a “thing” for trains. I’m not sure what it was, but like myself, I have my “things” too. Like I have a “thing” for waterfalls. Even small ones. Its interesting how something so simple like running, falling, water, stops me in my tracks, and time just seems to stand still:)

On the other side of the bridge was….Mr. Mulligan himself. He said he was having a great day. Feeling good, and knocking out miles quickly. Some hiking days are good where you can do this. Others you just drag @ss and can’t seem to get moving or make it anywhere to save your life. There were quite a few other thru hikers in the parking lot we talked to briefly while we figured out our plans. They were all going to a local hostel down the road and were waiting for their ride to pick them up and take them there. We decided to stop for lunch. Derby wanted to keep moving forward. So we parted ways telling him we’d see him up the trail later.

We stopped in at a local diner in Glasgow for lunch. We demolished a huge plate of supreme nachos while we waited for our food to arrive. We both got massive burgers and fries and demolished those off as well. Mulligan topped off his lunch with a milkshake the diner was known for. He said it was pretty amazing. As usual, with full bellies, we weren’t too motivated to get back on the trail and make more miles today. We grabbed a room at a hotel, got some laundry done, and I caught up on some work while Mulligan watched a little tv before we both passed out in our beds.