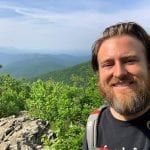 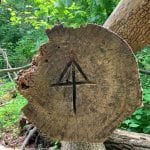 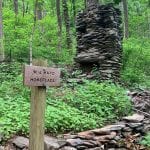 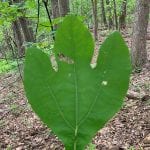 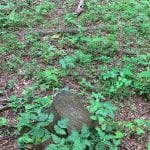 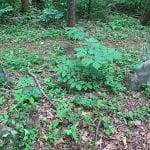 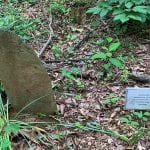 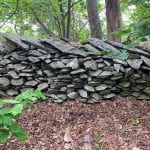 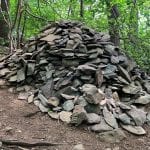 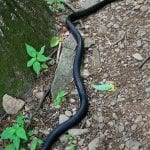 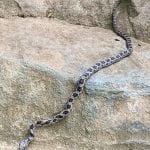 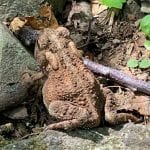 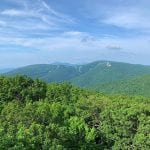 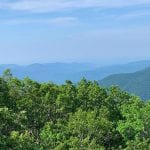 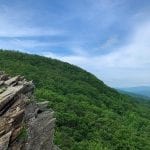 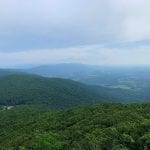 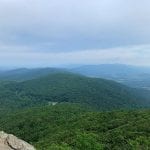 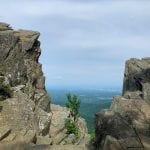 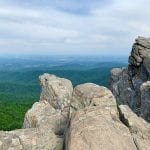 I awoke in my tent. It was a fairly warm evening. Even though we camped on a mountain ledge and it was pretty windy all night. I scarfed down some breakfast quickly. My normal oatmeal with a squirt of cold water. I finished off what little water I had with my breakfast. Which meant I would be starting my day without any water. It’s a good practice to drink a liter or two before you start hiking. I could either go back .5 miles, or hike forward to the next water source, which would be located in a park bathroom. Our app said the bathrooms might be locked though. If so, it would be another 3 miles before the next water source. I decided to hike forward anyway. I packed up my stuff, told Mulligan my plan, and was off.

It was a mile before I came to the blue blazed side trail that lead to the park bathrooms. I didn’t realize it was yet another .5 miles off the AT to get to it. Which means an extra mile of hiking, and no guarantee there’d be water there. I had to take the chance, so I took the blue trail, and headed down the hill. I arrived at the parking lot. There wasn’t a bathroom in sight. No signs, no nothing. Hmmmmm. I figured I’d walk a little further up the hill in the parking lot to see if it was close. Sure enough, it was. I made my way to the bathroom and checked the door to see if I could get it….it was locked! Shoot! There was a faucet outside, I checked it to see if the water was flowing….it was! But boy was it brown. I let it flow for a minute or so and it cleared up. I filtered it anyway, added some electrolytes, downed two liters, filled up another, and was back on the blue blazed trail headed to the AT where I got off.

I didn’t see Mulligan so I guess he didn’t need water. I wasn’t sure if he was behind me on the AT or ahead. I made my way back to the AT and headed north up a decent size mountain. The view at the top was nice. I could see homes and hotels / condos built on top of the mountain though. This was the first time I’d seen this. Typically we see nothing but wide open wilderness. No evidence of mankind in sight. Which is nice. Though I could see some buildings / housing in the distance, it was still a nice view. As always, I snapped a few pics, and continued up the trail.

Over the past few days I’ve seen a lot of stacked stone walls. I wondered who created these, and why. Were they barriers for battles that took place many moons ago? Were they simply markers that bordered property lines? I wasn’t sure but it always amazed me to see these structures way out in the middle of nowhere. No matter how primitive they appeared. Someone, or some people, certainly spent a lot of time and effort to construct them.

My next stop was down another blue blaze to Hump Back Rocks. It was totally worth the extra few steps off the AT. The views were amazing. While I was admiring the views, and taking more photos, Go Forth and March Forth caught up to me. We stopped and chatted for a bit. We talked about taking our time and enjoying our experience. Not rushing things, stopping to smell the roses, etc. It always nice enjoying something like a view with someone else. No matter how well you write about, how great of pictures you take, its nothing like experiencing it yourself. And to be able to share this experience with someone else, just makes it that much better. I told them I was off and I’d see them up the trail.

On my way down I saw my first snake of the day. And this was the first I’d seen like this. All of the others were long black rat snakes. This one was a lot smaller. It had silver and reddish neon spots all over it. It looked dangerous. I’ve heard baby snakes can be more aggressive too as they can’t control their venom if they are venomous. I kept my distance but snapped a few photos. Often if these critters are on the trail, I try to scoot them off of it, so no one behind me accidentally steps on or near them and gets bit. This was a popular place to for day hikers. There were families with kids all around. So I nudged him along.

While talking with Go / March Forth, I noticed they had strange leaves in their hats and around their necks. I asked them if those were to help with keeping the bugs away. They said they were. They were Sassafras leaves. I took a picture of one so I could find my own and try it out. I found a tree, plucked a few leaves, stuck them in the collar of my shirt, and hiked for a little while to see if it helped keep the bugs away. It did seem to help a little bit. I’m not sure if it was worth looking like Tarzan covered in jungle leaves though. As they fell out of my clothes, I decided not to get more.

I caught up with Mulligan who must have passed me when I was getting water earlier in the day. We were hiking along when we came across the 2nd snake sighting of the day. This was another one of the long black rat snakes we’d seen so many of. We snapped some pics and grabbed some video of him slithering along. You’d think one video of a black snake would be enough as I got plenty of video yesterday. Nope. Each one is different, in a different place, slithering different than the one before. I wondered if this would ever get old? I hoped not. I was fascinated with these little guys. It was a good thing too, because it wasn’t too much further up the trail when I saw another. 3 snakes in 1 day!

Mulligan got a little ahead of me so I wasn’t sure if he stopped at the next view or not. It was another short blue blazed trail which lead to Glass Hollow Overlook. I, of course, took the blue blazed trail in that direction. I reached the view but didn’t see Mulligan. He must have passed this one up. I snapped a few pics and headed back to the AT to start a decent down the other side of the mountain. As I came down the hill I could hear the sounds of rushing water from a nearby creek. I arrived, there was Mulligan, filling up on water, and snacks. There was a shelter close by with quite a few people. A few thru hikers and several day hikers. Go / March Forth showed up and took a dip in the water to cool off.

Mulligan and I hiked on. We passed by the Lowe Family cemetery and MJ Mayo home place. Again, we’re in the middle of nowhere, and to see that people used to live out here in the woods like this, was pretty fascinating. We snapped some pics and marched on. As we hiked throughout the day, we talked to just about everyone. It might be just a few words as we passed by, but quite a few people had seen bears. Not us though. I thought for sure we would.

Mulligan got a little ahead of me so I hiking alone. I kept listening for bears. Then finally, I heard something, something big just down the hill from the trail. I was glad it was downhill instead of up above me. I stopped in my tracks and listened. I could see something moving, I just couldn’t tell what it was. It started making crazy noises though. It was very strange. I caught a glimpse of it. Or one of them I should say. It sounded like there were several of them down there. It looked like a fox. It was making these sounds. I thought, perhaps these were mating calls or something? I decided I should move on. I couldn’t get any pics of it anyway. So I hurried along.

A few miles up the trail I ran into Pretzel. I hadn’t seen her in weeks. We stopped and chatter for a bit and caught up. She took a week off the AT to attend a family reunion. She said it was nice, taking a break from the trail, but also to see her family. I told her I took a few day or two breaks as well. But she was really far behind her tramily now, so she was putting in some serious miles to try and catch up with them. We hiked the rest of the day together, which was about 5 miles, into town. We got off the trail at Rock Fish Gap.

There was a hot dog stand which also served drinks and other snacks like popcorn. Mulligan was there. We met a new hiker by the name of Walden. He’d only been on the trail for 1 month and was where we were. We’d been on the trail for 2.5 months. Needless to say he was putting in some serious miles. Pretty much 25+ miles a day since he started. We all hung out and ate and chatted for a bit. Since we were headed into town, Pretzel was offloading quite a bit of food she had. She said there wasn’t anything wrong with it, she was just tired of eating the same stuff. So I resupplied, with all of the food she was about trash:)

There were quite a few others there too. Pretty much everyone was going to a hostel called Stanimals. The driver arrived to pick up several of them. She wasn’t sure if they had room for anyone else at the hostel. There wasn’t any room in the SUV either so we called to see if they had room and could come back to get us. They couldn’t tell us either. So we decided to get a hotel instead. The hot dog stand had a list of Trail Angels in the area that offered free rides. We called one and he was there in minutes. He picked us up and took us to the hotel. We offered to pay him but he wouldn’t accept it. We checked in, showered, and I caught up on some work while Mulligan watched a little TV before falling asleep.