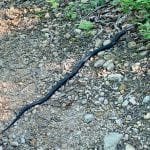 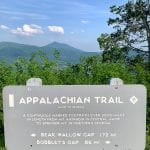 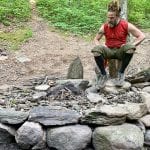 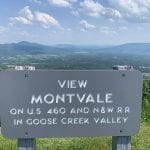 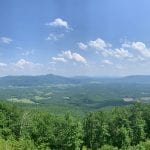 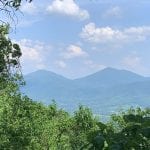 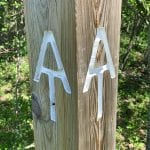 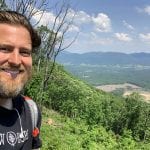 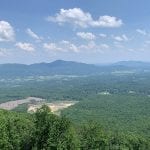 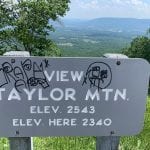 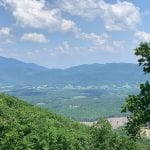 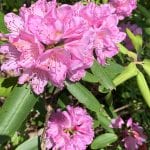 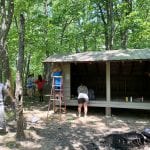 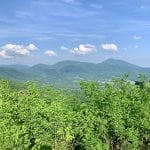 I awoke to the sounds of boy scouts and their leaders packing up and talking loudly amongst themselves at 5:45AM. They didn’t seem to realize others were still sleeping around them. Even though there were several of us in tents not stirring or making any noise. They packed up and headed out of camp shortly afterwards. I usually got up around this time anyway, if not earlier, so it wasn’t a big deal really.

I ate, caught up on some work items, journaled, packed, resupplied water, checked out some possible end points for the day, quickly discussed those Mulligan, and then hit the trail. It was the first day I was sweating before even leaving camp. It was hot out and it was supposed to get up into the 90s later this afternoon. I was drenched wet from sweat within the first 15 minutes of hiking. It didn’t help there was a steep incline to start off the day.

After about 3 miles Mulligan caught up with me. We stopped at a camp site to take a water break. Mulligan was soaked too. We hiked for a few more miles before coming to a shelter. There were quite of people there repairing the shelter. They were from the Virginia Tech Outdoor Club. It’s amazing seeing all of these people volunteering their time to improve the trail and its shelters. We thanked them for their hard work and then got out of their way and back on the trail.

The temperature continued to rise. We continued to sweat. We stopped again for a short break. Mulligan took his shirt off and rang it out. Sweat poured out all of the ground. Geeez. And I thought I sweat a lot. I thought if we could just get to the top of the mountain there might be a breeze. Sure enough, I was right. With our clothes soaked wet and the cool breeze we cooled off quickly. It felt amazing.

There were quite a few beautiful views along this stretch of the trail including Mountvale and Taylor Mountain. Of course I stopped and took several photos. We ventured down the other side of the mountain to another shelter several miles later. There was someone there already. He looked to be working on the fire pit. This was a hiker though. What was he doing? He appeared to be enhancing the fire pit by adding stones all around it. His name was Max. He said he used to be in the landscape business. As to why he was doing this work we had no idea. He seemed like a nice guy. From what we gathered he’d been at this shelter for several days working on this new and improved fire pit. I don’t think he was thru hiking the trail. Maybe just living in the woods working on shelter fire pits for free? When we weren’t talking to him, he seemed to be talking to himself. I snapped some pics, then we resupplied our water, and started to head out.

Before doing so, we ran into another thru hiker that went by the name of Fit. We camped with him the night before. Well sorta. He was at the camp site, we got there pretty late, we setup our tents, ate in inside of them, and then went to bed. So we really didn’t talk much. But anyway, he planned on staying at the shelter where Max was staying. It would have been a 10 mile day. Fit sprained his ankle pretty badly so he’d only been doing 8 mile days to take it easy. He knew we were just going 5 miles further so he tagged along with us.

We took the side trail out of the shelter back to the AT. We had a short climb for a few miles which lead up to a ridge line. We hiked that for a few miles, then made our way down to a creek. We once again filled our water bottles as there wasn’t a water source at the camp site we planned on camping at this evening. We had one last steep climb to go. On my way up I stumbled upon another long black snake. I took a few pics and a video as he slithered off the trail.

I got to the camp site, setup my tent, and sat down with Mulligan who was already there. We started to cook our dinners when Fit arrived. We pointed out a good flat spot for him to setup his tent. He did so and sat down to cook and eat his dinner with us. We chatted over dinner and learned Fit got his name from, well, hiking the AT to get… fit. We climbed into our tents to retire ourselves for the evening. I, as usual, caught up on a few work related items before falling asleep. Another day hiking the AT in the books…