Hiking the AT – Tar Jacket Ridge / Spy Rock / The Priest 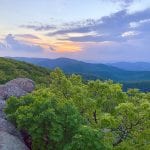 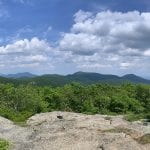 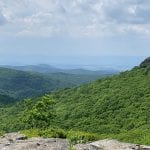 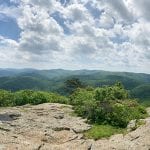 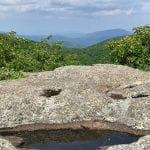 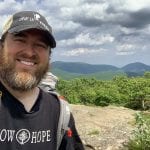 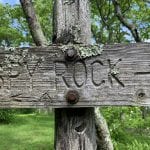 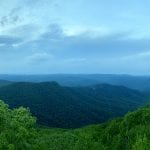 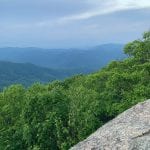 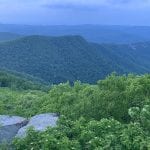 (05/26/19) I awoke once again in my tent. I was pretty comfortable. Well, as comfortable as one can be sleeping on the ground on a light weight mattress in a sleeping bag fighting off bugs and spiders that somehow managed to get into my tent overnight. I could hear there was a breeze outside. I could feel my clothes were still wet from the rain shower that hit us late in the day yesterday. So I got out and hung my clothes up to dry out on a tree branch close by.

As always, I finished my 2 litters of water during dinner and through the night. So I grabbed my water bottles and headed down to the spring to refill them. On my way down I noticed a huge branch on the ground about 20 feet from Mulligan’s tent. I remembered hearing a loud thud in the middle of the night. The branch was huge. I’d say it was about 25 feet long and might have weighed a few hundred pounds. Thankfully it didn’t land on Mulligan’s tent…or mine for that matter.

I returned to our camp site and Mulligan was preparing to make a water run as well. I ate breakfast and waited for him to get back. It was still early but it was already heating up outside. We figured we needed to pack up and get on the trail before it got too much later…and hotter. So we did just that.. packed up and hit the trail. We were starting out at Hog Pen Gap. We hit an immediate uphill into a wide open grassy field. The sun was beating down on us, and cooking the rain on the ground, that fell the night before. It felt like a sauna. Before we knew it, we got some coverage under trees, which provided us shade pretty much for the remainder of the day.

We made our way to Tar Jacket Ridge and snapped some photos. It was pretty. The terrain was mostly made up of rolling hills and it felt like we were heading downhill most of the day. It was rocky though. We stopped at a shelter for lunch. There were a couple of other hikers there. One had a dog. We chatted with them for a bit but I didn’t get their names. We parted ways as we hit the trail again and for the next 500 feet we climbed up, up, up to the top of Spy Rock.

Mulligan got ahead of me so I wasn’t sure if he stopped at the view or not. I took the blue blaze to find out. I’m glad I did. It was beautiful. There were quite a few day hikers there. I offered to take a photo of 2 girls and their dog. I carefully took one of their phones to take the photo. I was pretty gross, smelly, and dirty in general. I didn’t want to slime their phone:) I took a few pics, they thanked me, and left. As did the other folks that were up there. So I had the whole 360 degree view to myself. I took some video and photos and climbed back down off the rock and back onto the AT. No Mulligan in sight.

I passed a few section hikers on my way down the mountain. We said hello to each other and they asked if I was thru hiking. I told them I was. They asked if I wanted some snacks. Of course I took them up on their offer. They gave me a Star Crunch and a Ring Pop. Both of which I hadn’t seen or consumed in ages. Like 20 – 30 years maybe:) I thanked them. One guy said, “the best calories are the ones you don’t have to carry.” I told him “I couldn’t agree with you more.” Obviously he’d either thru hiked or had a lot of experience long distance hiking. I then passed a trail maintainer trimming back the grass off the trail. I thanked him. Then passed a ridge runner as he informed me they were expecting record high temps this week. “Drink plenty of water” he said. I thanked him as well.

Our destination for the day was the Priest Shelter. It was close to the top of Priest Mountain, AKA The Priest. I arrived. There were quite a few people there. From what I could tell, mostly thru hikers. There were a few section and day hikers though. It was a popular shelter for people that wanted to watch the sunset or sunrise from The Priest. Mulligan got to the shelter before I did. And as he often did, he found a place for me to setup my tent. I got setup and joined him and the others at the shelter table for dinner. We cooked and ate dinner and chatted with the other hikers. Monk was there. We ran into him back at the other “haunted” shelter. I meant to ask him if he saw any ghosts that night, but I forgot to do so:)

We finished our meals, got water, and climbed into our tents. I checked the weather on ATWeather.org. Anytime we were camping high up on a mountain top, I liked to use this website. It allowed us to check weather based on the shelter we were staying at. Say for example, if you’re on top of Clingman’s Dome in TN, and you wanted to know the weather at 6500 feet up in the air at the shelter you’re staying at, vs just checking weather.com, which gives you the weather in say the closest city (Gatlinburg) at 1300 feet, this website would provide that information. I found this website to be pretty accurate. It was showing a 60% chance of rain, and temps dropping below freezing, and we could expect large hail and damaging winds. Yikes! We were already setup though, and it was getting dark. So there wasn’t much we could do about it then.

Not knowing what the weather would be like in the morning, and remembering I missed the sunset and sunrise at McAfee Knob, I figured I should get up and go see the view from The Priest while I had the chance. So I got up, put my boots back on, grabbed my headlamp, and started the .3 mile trek up to the top. There was a couple there when I arrived. They had the view to themselves. I felt like I was intruding. I said “hello” and snapped a few photos though. The sun was behind clouds so you couldn’t see much anyway. I ventured back down to the shelter.

When I arrived, everyone was in their tents, hammocks, or in the shelter preparing to sleep. I climbed back into my tent and was catching up on some work when I heard several people in the shelter reading from the shelter log book. This log book was somewhat famous on the trail. Because this was The Priest shelter, people wrote “confessions” in this book. One hiker was reading while the others listened: “I put rocks in my hiking buddy’s food bag”, “I didn’t bury my poop today”, “I peed too close to a water source”. The others laughed quietly. I chuckled a bit myself. Hiker humor 🙂