Hiking the AT – the Lithuanian Solo Hiker / Campground Pitstop 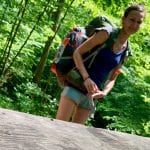 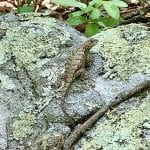 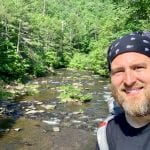 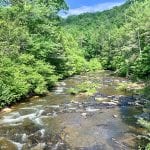 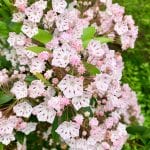 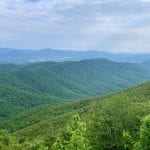 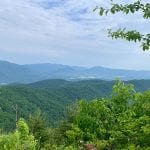 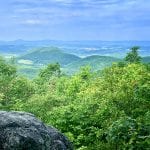 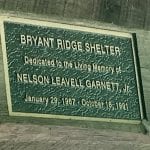 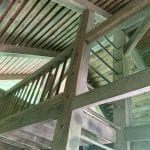 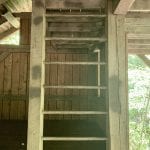 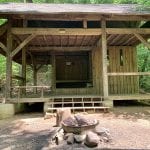 (05/2/19) I didn’t sleep well at all last night. I’m not sure why. I didn’t fall asleep until after 11PM. I tossed and turned all night. I think there may have been caffeine in one of the flavor packets I put in my water late in the afternoon before I ate dinner.

After a late start yesterday and hiking all day in 90+ degree temps, my plan was to get up earlier this morning and hike while it was still relatively cool outside. The sun rises at 6AM but seeing how it was so late already I knew I wouldn’t get up at 5AM to start packing. So I set my alarm for 6AM. I ate, handled some business items, and packed my stuff. I still didn’t end up leaving camp until 8AM. But I guess that’s better than 10AM or 11AM which is about what time I had left the past few days. Other than it being cooler out in the morning, my thought was if I could leave camp earlier, I should get to my next destination earlier in the afternoon, I’d get the best spot, get setup, and could get some work done before others came in. Then I could socialize afterwards.

I was completely out of water to start my day. I was dehydrated too. My hands were cramping. I either had to go back 1 mile to get water and then come back up adding 2 miles to my day, or trek forward for 5 miles before resupplying my water. I checked the elevation heading north and it was all downhill. I decided to move forward in hopes my dehydration didn’t get too much worse before I reached water in 5 miles.

It was cool as the sun hadn’t come up yet and the wind was still blowing. It felt nice, really nice actually, after sweating so much the previous days. It was also nice having such a long downhill to start the day. It seems like more times than not we end our days going downhill into camp. Which means we end up starting our days going uphill. So again, this was nice for a change.

After 5 miles I made it down to the creek to resupply my water. Thank goodness too as I was starting to sweat out any water I had left in me. While there another hiker stopped for water. Her name was Fly By. I assume she got her name by flying by people on the trail. As we finished getting water about at the same time, she left a few steps ahead of me, and I didn’t see her for the rest of the day.

I continued down another mile to Jenny’s Creek. A street crossed the creek over a bridge. There were camping spots here. I’ve heard this was a popular swimming hole. The water was definitely deep enough to swim in. I was hot but it was still early in the day. I knew if I stopped I might not hike anymore, and I wanted to get some more miles in, so I snapped a few pics and pressed forward.

After hiking downhill for quite some time I started traveling back up another mountain. It wasn’t too bad though as it was a gradual incline. The sun was definitely up and shinning bright now and with that came the heat. I was happy I just filled up on water because it was pouring out of me once again.

The trail leveled out for a few miles and then started to descend again. I soon found myself back on the forest floor deep in the woods walking alongside another creek. Whenever you get close to water the bugs seem to multiply. They usually don’t bother me but with the constant buzzing in my ears I found myself swatting around my head and face with my trekking poles non-stop. I could only imagine how this looked from a distance. Like I was practicing Kung fu walking in the woods by myself ?

I arrived at a shelter. A very nice shelter at that. Probably one of the nicest ones I’ve seen on the trail. It was perched up on a hill surround by the creek with large covered porches on two sides. It also had an upstairs area for more sleeping space.

There was a young lady sitting at the table by herself. It still amazes me how many young women are out here by themselves. She was visiting the US from Lithuania for a few weeks. She only knew one other person in the US. She visited him for a few days before hopping on the trail. She wasn’t thru hiking though, she was just southbound hiking a section. As if hiking the AT isn’t amazing enough in itself, can you imagine doing something like this in another country, where you only know one other person? We sat and chatted and ate lunch for about an hour or so.

She couldn’t get over how a bunch of grown adults walk around referring to each other by code (trail) names like Papa Smurf, Magic Mike, and well… Wolverine. I hadn’t met Magic Mike but I wondered if he danced for people in the woods while he or one of his friends sprayed bottled water all over him? One thing I wondered but didn’t get a chance to ask her was, why the US, why the AT? What makes someone from another country want to come here and hike this trail? She was headed south, I of course was headed north, so we parted ways as she got back on the trail.

I refilled my water and packed my stuff up. I figured I’d wait a little while longer for Mulligan and Fit to see if they’d catch up. Before I knew it, both of them turned up. I sat and waited for them to finish their lunches and refill on water as well. We discussed our next move.

Mulligan found a camp ground close by. We could go there for lunch and a drink. Though they had shuttle service, there was no phone reception in the area. So worst case scenario we’d just walk if we couldn’t reach them via phone. It was 2 miles. Fit decided to hike a little further on the AT to get in a few extra miles today. We told him we’d meet up with him later. Though something told me we very well might not be coming back to the trail after our lunch break. On a positive note, we’d already hiked 12 miles by noon. So if we didn’t hike any further, it wouldn’t be such a bad day.

We got off the trail and hiked down a dirt road and arrived at the camp ground. There were RVs everywhere. The store was open so we went in. We were greeted by a few lazy dogs and the smell of hamburgers grilling inside. We ordered bacon cheese burgers, fries and nachos and downed a few drinks while we waited on our food. After our big meals Mulligan mumbled “nap time”. I chuckled as I was right, we were done hiking for the day. We rented a cabin / room and grabbed our stuff and headed that way.

We walked in and immediately got hit with a heat wave. This “cabin” was a wooden box with a few beds with plastic covers, no sheets, an AC unit and a refrigerator. We turned the AC on full blast, opened the refrigerator and freezer doors, to cool the place off. We waited outside as it was cooler out there than inside.

We decided to take showers (not together of course! :)) I went first while Mulligan got laundry going. This place was interesting. It wasn’t really for hikers. It was more for RV folks. The shower didn’t have any soap or shampoo and we didn’t have towels either. I managed to find some soap and after showering dried myself off with paper towels. Yup, that was a first:) But hey, it was a shower, and I was clean. That’s all that really mattered.

After Mulligan showered we hit up the store for dinner before they shut down the grill. Even though it seemed like we just ate– we were hungry already again. We ran into Derby, who also stopped in for a bite to eat. We ate dinner together, caught up since we last saw each other, then he hitched a ride back to his camp site he’d already setup. We headed back to our wooden box “cabin” for the evening.

I got some work done and rolled out my sleeping bag on the plastic covered mattress “bed”. The room finally cooled off so I was able to fall asleep pretty quickly. Thank goodness…