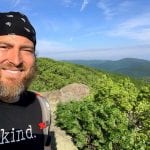 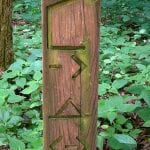 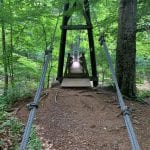 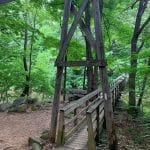 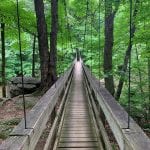 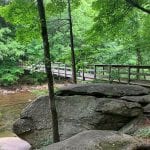 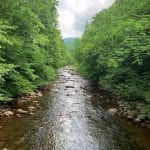 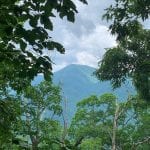 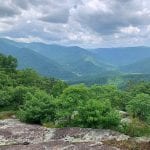 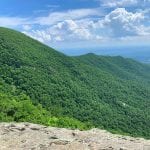 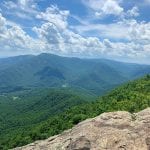 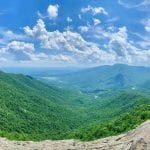 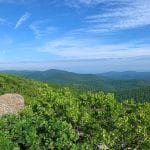 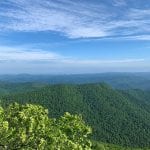 Last night, I checked the weather, and the forecast was calling for damaging winds and possible hail. There was a 60% chance. Well, we didn’t get any hail, thank goodness, but we did get a lot of rain and high winds. If that wasn’t enough to keep me up, owls ‘who whoooo’n and coyotes howling throughout the night certainly was. So needless to say, I didn’t sleep very well. Mulligan was already up as well. He too didn’t sleep well either.

We had been out on the trail for several days now, and it was time to go into town and resupply, shower and wash our clothes. We were looking forward to sleeping in a real bed for a change too. We ate a quick breakfast, packed up, and hoped back on the trail. We had another 15 mile day planned. This trek this week worked out pretty well. 3 – 4 days of hiking, every day about 15 miles. Finding camp sites / shelters every 15 miles doesn’t always work out. 15 miles a day was a pretty comfortable goal for us– so that’s what we aimed for each day.

We had a short .3 mile climb back up to the top of The Priest. But essentially we were starting on top of a fairly large mountain, which meant, we had a pretty nice decline to start the day off. Though I went to check out the views from The Priest last night, of course, when we stopped, I took quite a few photos again. Last night the sun was starting to set, and this morning, the sun was shining bright. So everything looked a bit different. It was a beautiful sight to see– both times.

The trail was rocky and my feet were definitely feeling it this day. It forced me to move a little slower than usual. Anytime the trail forced me to move slower I told myself what I often heard, “the entire AT is about 1 million steps. It takes just 1 miss step to get injured and take you out of completing the trail.” So every step I took, I tried my very best to focus on where I was stepping, and ensured it was solid ground before putting all of my body weight on my feet and moving forward. Imagine mentally having to do this about 5,000 times a day. I know, it’s just a “walk in the woods”, right? This is partly why I wasn’t able to focus on quite a few things I set out to accomplish mentally on the AT. More on that later…

We made it to the bottom of the mountain. We could hear the sounds of a creek flowing nearby. Its always such a peaceful, relaxing sound. We could hear cars zooming by ahead of us too. We made it to a parking lot. There were quite a few hikers hanging out socializing. I thought, “ooh, maybe there’s some trail magic up ahead.” Sure enough, there was! The giver of this trail magic was a former thru hiker. Her name was Peach. She lives in Pennsylvania. We were in Virginia. What was she doing way down there? She had been following the “bubble” (large group of thru hikers) as they made their way south to north, from GA to ME.

She started in GA, and met quite a few thru hikers she really liked. She kept coming back to the trail as often as she could and her timing allowed her to reconnect with those hikers over and over again as they made their way north. She worked during the week and drove to the trail on weekends to give away food and drinks to thru hikers. She was looking forward to when the bubble made it closer to PA so she didn’t have to drive so far. Being a thru hiker herself, she knew what we wanted and really liked. She had sandwiches, fruit, cookies, soft drinks, etc. It really hit the spot.

She was offering another type of trail magic too…. slack packing. Mulligan and I debated whether we should do it or not. We only had 11 more miles to go to get to Devil’s Backbone Brewery. But when we saw other thru hikers partaking in this opportunity– we decided we probably should do the same. Again slack packing is when you hike all day with a lighter pack. Like a day pack with just some food and drinks. Peach gave us slack packs to fill with food. We threw our real packs in the back of her vehicle. She must have had another 20 packs already piled in there. The plan was she would meet us on the other side of the mountain and we’d get our real packs back. Amazing! We thanked her and headed out crossing a suspension bridge that carried us across the Tye River before we started the climb. I stopped to take some photos and Mulligan took off up the hill.

I came to an intersection where another trail crossed the AT. It allowed you to by-pass this massive climb up Chimney Rock and the Three Ridges. This was a blue blazed trail. It would shave off 5 miles from the hike today as well. Purest would never take a blue blaze shortcut like this. Though I wouldn’t consider myself a Purest, both myself and Mulligan, we are trying to hit every single white blaze we can. Side note: Purest don’t slack pack either. Mulligan did mention this blue blaze while we were getting trail magic. With him nowhere in sight, I wasn’t sure which way he went. I wondered if he took the short cut. We hadn’t taken any short cuts so far. We were slack packing too. Surely he didn’t. If you were going to take a short cut though, this would be one to take– to avoid a massive climb and skip 5 miles. I took the white blaze, on the AT, up the mountain.

This was a ridiculously difficult climb. At that point I realized how great of a gift Peach gave us by allowing us to slack pack this mountain. I got half way up to a view and took some pics. I continued up the mountain, still climbing, it was very steep. Not too much further up was another view and low and behold who was laying there basking in the sun…Mulligan! I yelled out “white blazers!” He laughed and got up. He asked, “you didn’t think I took that ol’ blue blaze did you?” I laughed, “no, not at all”:)

We continued the second half of our daily hike together. I don’t know what was worse, the climb or the horseflies. They were relentless. Circling our heads buzzing and flying smacking into us. It was bad. I started flailing my trekking poles around my head like a ninja swatting enemies until I hit one or two. The first one hit the ground, buzzed, then took flight again! You’ve got to be kidding me, I thought. I knocked a few more down and finally they gave us and flew away.

We got to the top and two guys and a girl were camping out. We said “hello” and continued on. There was another amazing view from this huge hanging cliff rock formation. I, of course, stopped and took some photos. The 3 campers caught up with us and sat down and we admired the view together. They were from the area and knew of Devil’s Backbone Brewery well. They said it was a really nice place. They asked if we were slack packing. We said “yeah”. They said, “that figures, we’ve seen a ton of people come over the mountain, looking like they’ve been living in the woods for months, but had day packs on their back. I chuckled and told them about Peach and what she was doing for us. They said “good call”. We parted ways as we headed down the other side of the mountain.

There was no water on the mountain. Even though we filled our bellies with sodas before we started the climb, we ran out before we reached the top. So we were getting dehydrated by the time we reached the bottom. We made it to a shelter that had a water source. I pounded a litter of water and then got back on the trail. Only 1.6 miles left until we made it to a parking lot. We made it, stepped out of the woods onto the payment, and right down the road was…. Peach. She had a shelter setup with chairs again and several hikers were hanging out drinking beers and stuffing their face with fruit and other goodies. The brewery wasn’t too far away but a shuttle was coming soon, so everyone was waiting on that.

The shuttle arrived, we exchanged our slack packs for our real packs and thanked Peach for her kindness. We hopped in and were off. The brewery was on a massive camp ground and was very hiker friendly. They had showers too. We needed to resupply and wash our clothes though. We decided to grab some food and a beer from the brewery while we contemplated as to whether or not we were going to stay there or not. The food and beer was amazing. A little pricey, but good.

We decided not to stay there though. We made our way into a town close by and reserved a room at a hotel that had a laundry facility. We got showered, did laundry, and I worked a little bit before passing out in big, comfy, clean bed, for a change. It was nice…